You are here: Home1 / States2 / Massachusetts 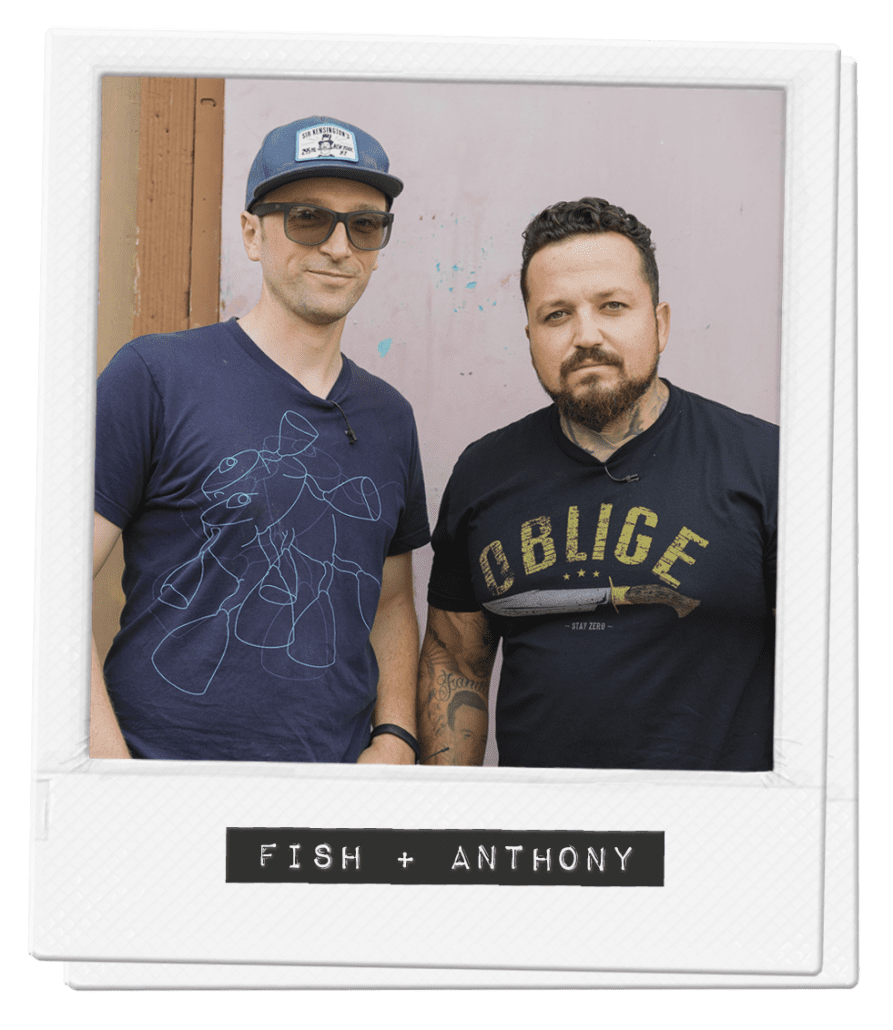 U.S. Marine Veteran Anthony Marquez and designer Fish McGill collaborated to create the design “XVII,” a stylized interpretation of the chainsaw carvings Anthony was inspired to create as a way to honor the 17 Marines his unit lost during his last deployment in 2011 in Sangin, Afghanistan.

Driven by the desire to honor the fallen and their Gold Star families, Anthony learned how to carve in 2016 and immediately pursued his newly-found purpose to carve 17 Battlefield Crosses in honor of those who made the ultimate sacrifice. Beginning with a large log reclaimed from a fallen tree, Anthony carves out and personalizes each carving to commemorate the fallen and then drives all over the country to hand-deliver it to the Gold Star family at their home or the gravesite of their Marine.

Inspired by the personal memorial display Anthony built in his own home, Fish presented the Battlefield Cross carving in front of a Gold Star and U.S. flag in a rugged, hand-etched style that symbolizes the compassion that drives Anthony to create each carving for his fellow Marines and their families, making sure to let them know that their sacrifice and loss will never be forgotten or fade away in time. 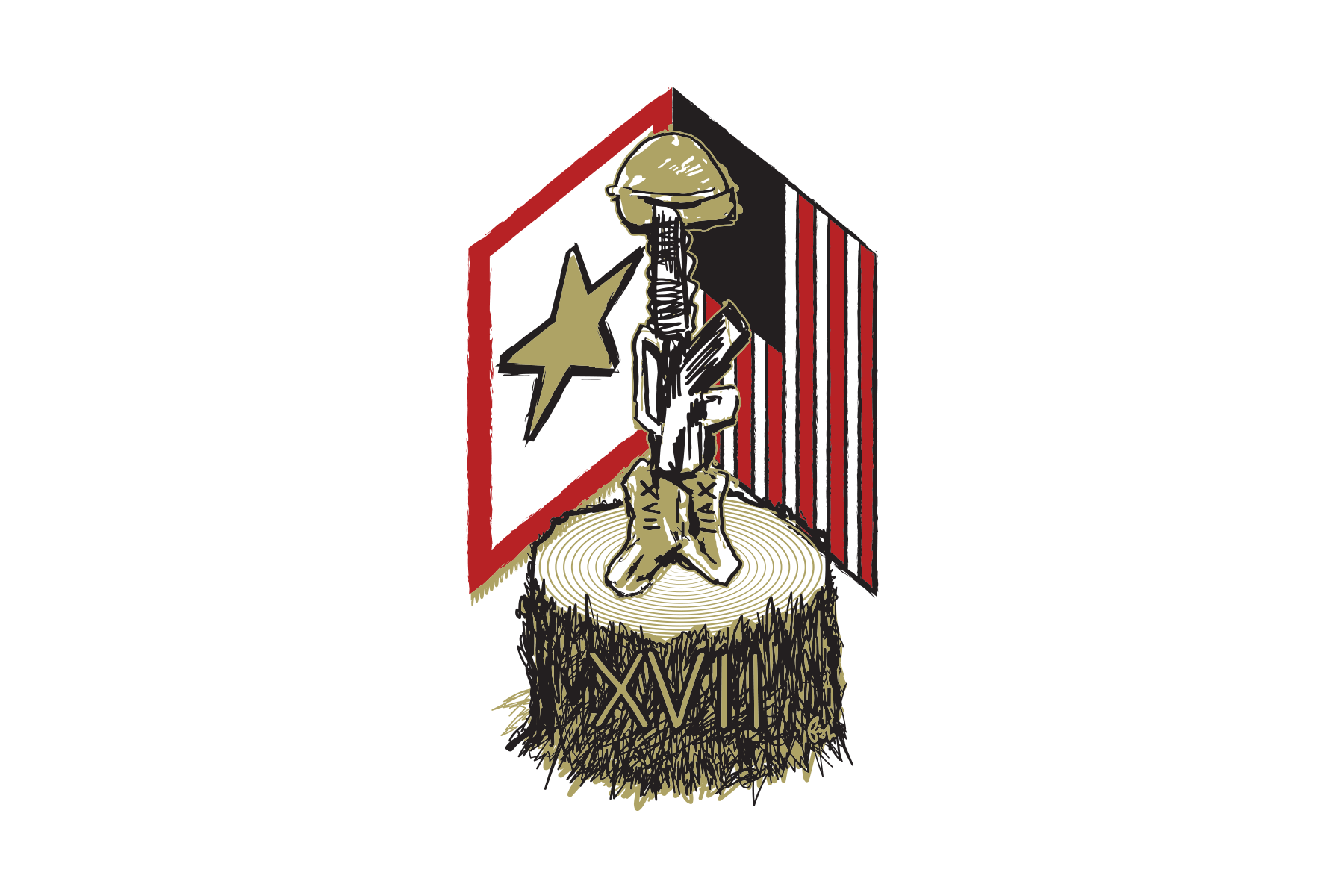 In collaboration with Alpha Industries, the designs from the 50 States: Veterans + Artists United tour are produced into a limited number of fifty t-shirts and embroidered patches. Click the product images below to purchase Anthony and Fish’s collaborative “XVII” design exclusively on AlphaIndustries.com. 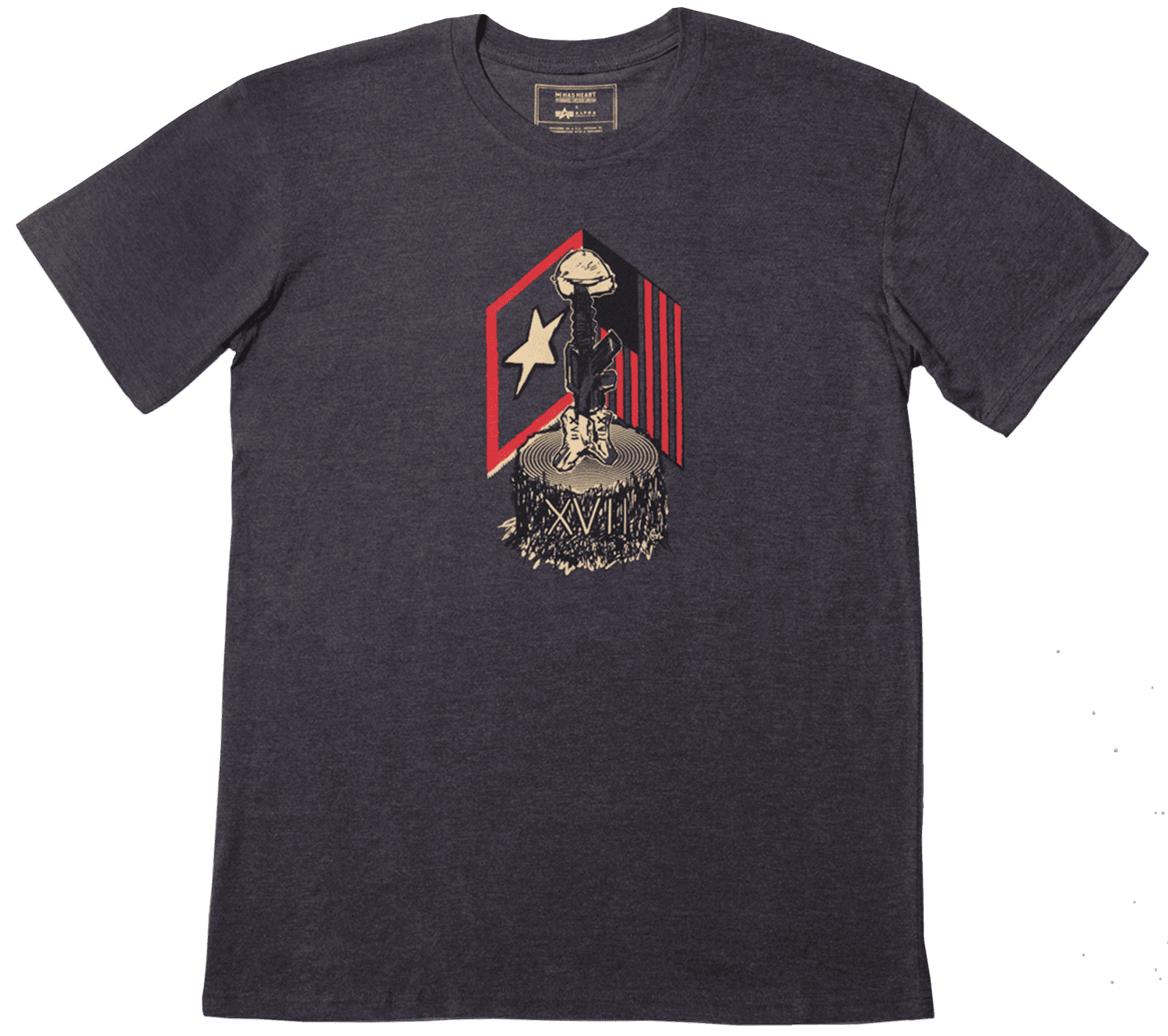 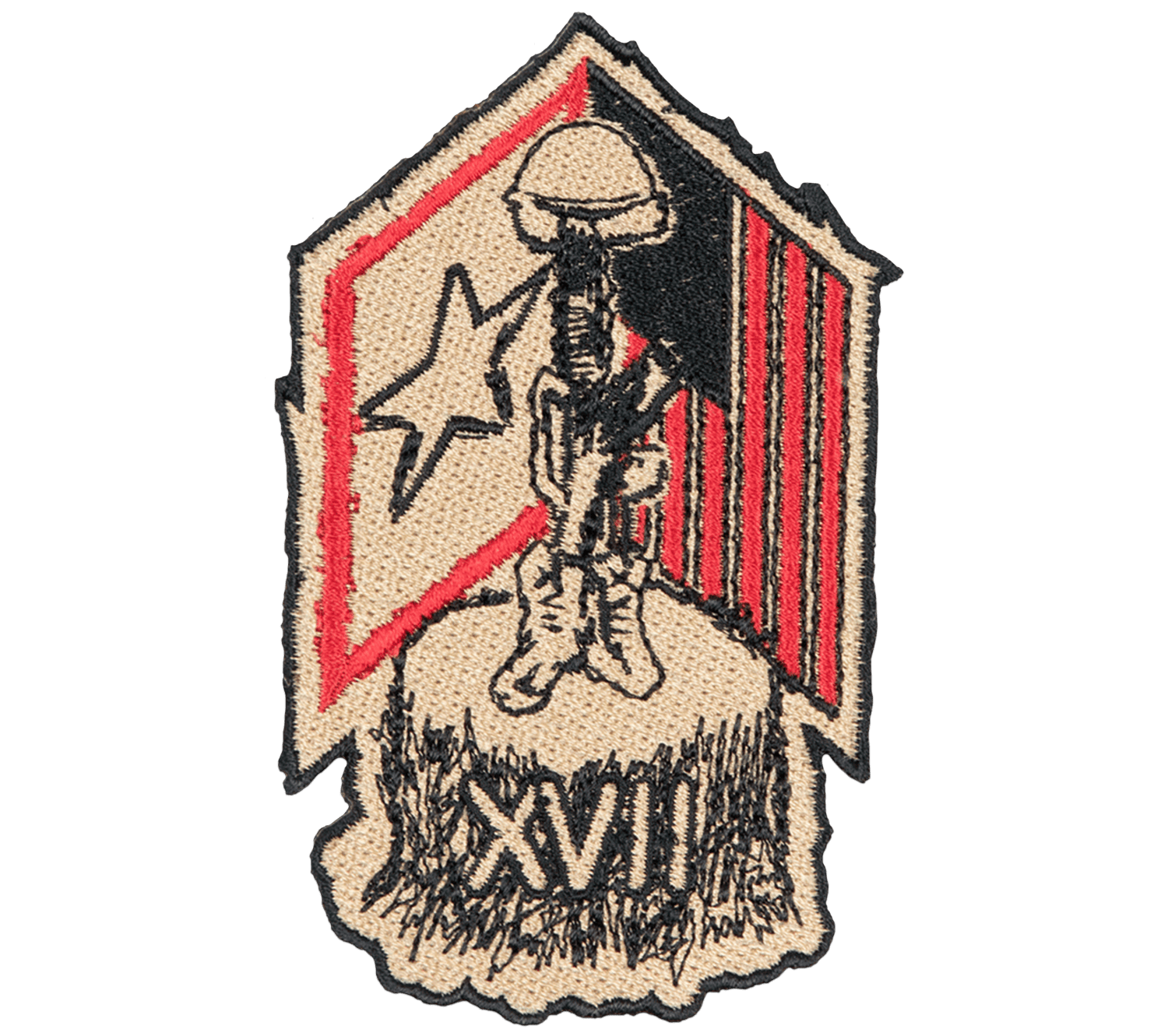 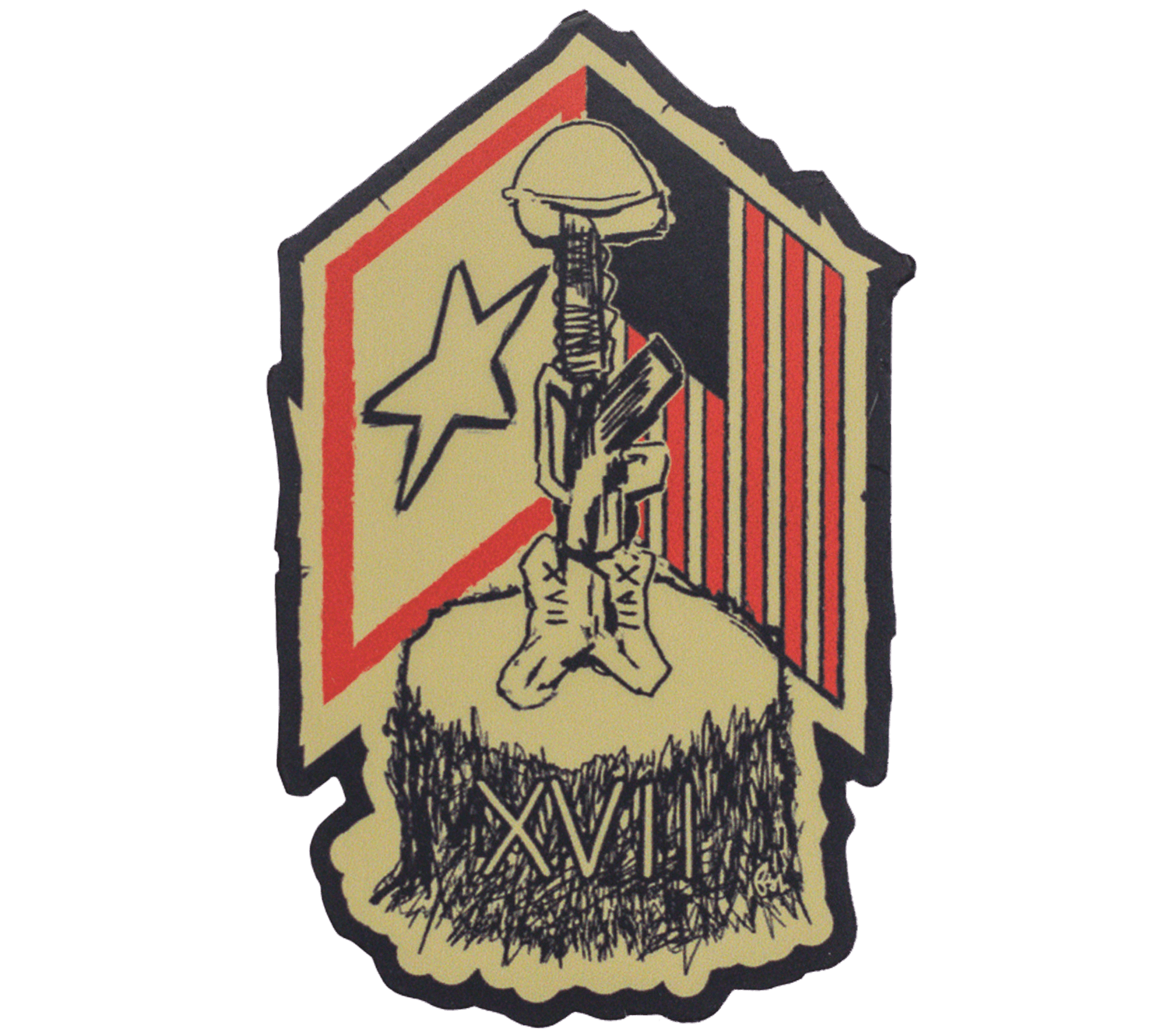 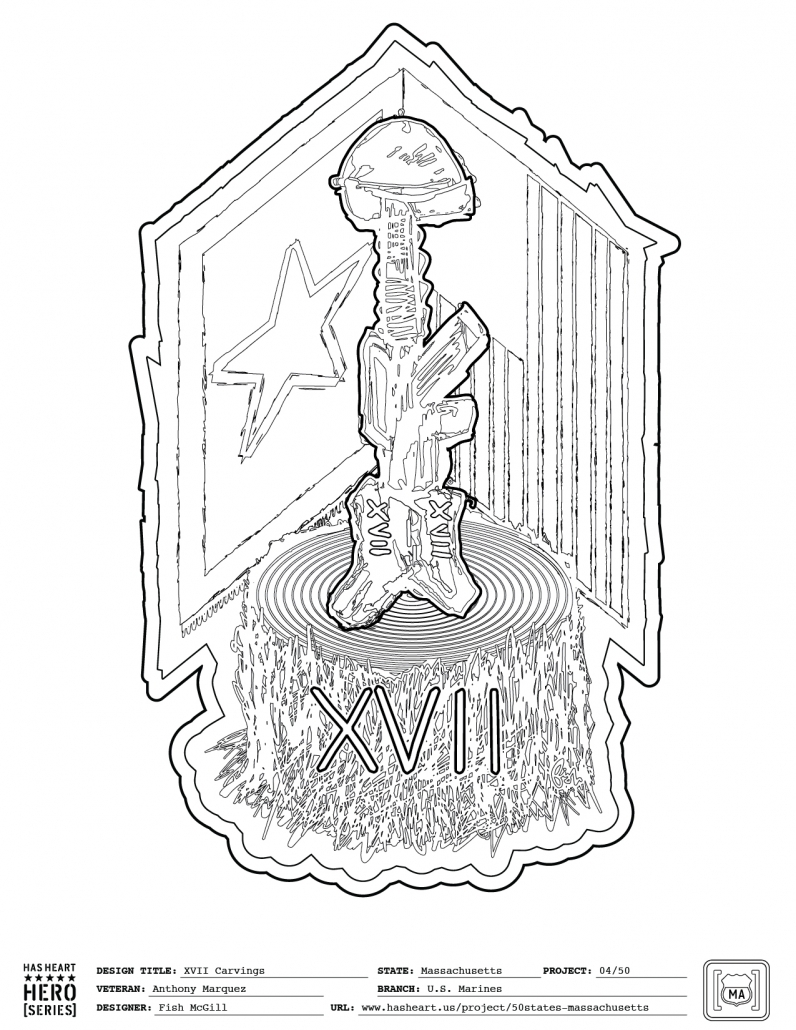 DIRECTIONS: Click on the coloring page or download button to open in a new window, then find the “Print” icon on the bottom toolbar. Be sure to select the “Print on Both Sides” option to ensure the Veteran’s story is printed on the back.

Although U.S. Marine Corps Veteran Anthony Marquez may be a reserved individual, he has found creative ways to express his thoughts and beliefs. One of those ways, specifically his work as a chainsaw carver, introduced us to Anthony.

In the summer of 2016, about four years after leaving the military, he combined his creativity with the desire to give back to the families of the fallen brothers in his unit, 1st Battalion 5th Marine Regiment.

As seventeen Marines were killed in action, he set out to do and deliver a chainsaw carving for each family who lost their son in the 2011 deployment in Sangin, Afghanistan, reminding them that they and their loved one are not forgotten. In addition to the carvings, Anthony plans to visit each gravesite of the seventeen, with the carving, as a way for him to personally commemorate his fellow Marines.

When we met him in August of 2017, Anthony had finished nine carvings and had driven all over the country to deliver them. We were introduced to Anthony thanks to Marine Corps Veteran Andy Biggs, founder of the Boston Wounded Vet Run, an annual motorcycle ride that raises proceeds for disabled Veterans, helping them pay for housing modifications, recreational objects, cars, basic living items, and other various items to help improve their quality of life.

Although a native of the Boston area and a Veteran himself, Andy suggested that Anthony be the Veteran participant and even offered his home as a place to work from the first day of the project. A compassionate man, Anthony had reached out to Andy earlier in the year when the Boston Wounded Vet Run was raising funds for a Marine that had lost his home to a fire. Offering one of his carvings to be auctioned off, Anthony drove to Boston to deliver the carving in April of 2018, struck a friendship with Andy and since then, has traveled to Boston two more times from his home in Oklahoma.

Fortunately, one of those Boston visits enabled us to cross paths with Anthony when we were conducting the Massachusetts design project on August 10 and 11th.

Partnered with Fish McGill, a long-time resident of Boston and a professor at the Massachusetts College of Art and Design (MassArt), the pair created the design “XVII,” a portrayal of Anthony’s dedication to his goal of making seventeen chainsaw carvings.

On the first day, we all met in Andy’s basement that was covered in patches, stickers, challenge coins, and mementos given to him by various participants and donors of the Boston Wounded Vet Run. As we all sat down in the lounge area and Andy’s English bulldog rolled around the floor at our feet, Fish immediately pulled out a marker and started sketching as Anthony began talking.

From a town just fifteen minutes south of Tulsa, Oklahoma, he comes from a line of military and since the age of six, he knew his future included the Marines. Between this junior and senior year of high school in 2006, he enlisted in the Marine Corps and in 2007, he left for boot camp, he shares with Fish. 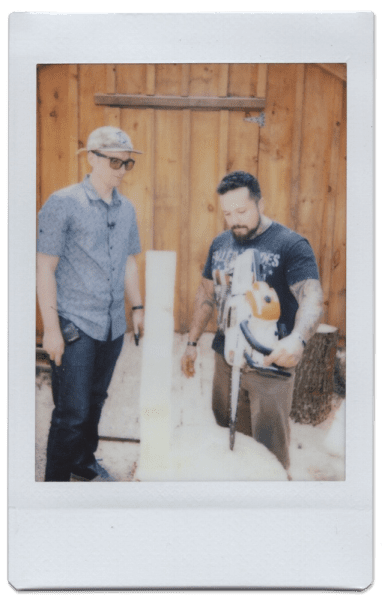 From 2007 until 2010, Anthony was in the Marine Corps Security Force Regiment and in 2010, he received his permanent change of station (PCS) to become a Dog Handler in the Marine Corps Military Police. Eight weeks before his deployment to Sangin, Afghanistan, Anthony was partnered with a black lab named Allie and the pair was deployed for several months, conducting searches, clearing buildings and areas, and detecting explosives among other responsibilities.

While Anthony left the military in 2012, Allie was deployed again. Fortunately, four years later, he researched her identification number and was able to adopt her, flying to North Carolina on a donated private jet ride to pick her up.

If you care to learn more about Anthony’s reunion with Allie, his brother Manny Marquez made a documentary that you can watch here.

“Being a dog handler was my favorite thing about the military,” Anthony tells Fish. “They are vital; they save a lot of lives and the Taliban knows this. They have a bounty on handlers and their dogs.” Listing all that Allie has been through from snake bites to gunshots, Anthony comments that she was with him in a vehicle that was blown up. Having been through thick and thin, the pair has a powerful connection that exists to this day. I look over at Fish’s notebook as Anthony continues to share more about Allie, noticing his drawing of a dog.

It was during this last deployment in 2011 to Sangin, Afghanistan, that seventeen Marines were KIA, including a few of his close friends. Living in constant uncertainty while deployed, Anthony admits to feeling that some days were his last.

”I mean, there’s this thing called survivor’s guilt because you feel guilty because you survived. There are different symptoms. People handle it differently,” he states. Although a private person, Anthony bares his soul creatively.

Covered in a variety of tattoos, he explains to Fish that they are a way to express his beliefs. “Most of my tattoos have meanings behind them,” he says. Even at that moment, his thigh was wrapped up in plastic from being tattooed earlier that week. In addition to tattoos being a creative outlet, Anthony taught himself how to weld after getting out of the military and made himself a motorcycle. When he became interested in chainsaw carvings, he reached out to a woodworker who mentored and helped him create the first Battlefield Cross carving for the XVII Carvings mission of his. After explaining that he only uses donated wood, Fish notes that the fallen trees represent the fallen Marines.

While all are a Battlefield Cross, Anthony adds details relevant to the Marine to personalize each carving. Needing to complete one within the next day, Anthony leads us outside where he moves a massive log to the center of the driveway.

As he begins blocking out the wood, the chainsaw deafens the sounds of the neighborhood and sawdust flies everywhere, catching on his dark hair and beard. Standing just off to the side watching, Fish feverishly sketches in his notebook. In the background, the chickens and turkeys in Andy’s backyard run about in their cages, alarmed by the blare of the chainsaw. This was definitely the location most unique for a project thus far on the tour.

On the second day of the Massachusetts state project, we all met at Fish’s studio in downtown Boston. A fun little workspace with different tools, artwork, and materials all about, the aqua blue wall with amoeba-looking figures hung up caught my attention. I then spot the numerous Moleskin notebooks lined in the bookcase. After asking what they are, Fish shares with us that every day he draws a moment from his day.

With Fish’s approval, I excitedly flip through his many books. From reading his son bedtime stories to adventures riding his bike, I felt like, for a moment, I walked through the life of Fish McGill.

After then looking through the doodles and notes he had drawn the previous day, Fish asks Anthony what message he wished to convey with the design. As if an extension of his mission with the carvings, Anthony explains that he wants to send a message of remembrance to Gold Star families, families who have lost their Armed Forces member and loved one. “A lot of families feel like their loved ones are forgotten,” Anthony says. “Sometimes they don’t get reached out to by battle buddies.”

With hope to provide families comfort in knowing that they and their loved ones are not forgotten, the pair concludes that the design would include an interpretation of Anthony’s carvings. After being inspired by an image Anthony shared of his personal memorial display he built in his home, Fish presents the Battlefield Cross carving in front of a Gold Star flag, to represent the families of the fallen, and a U.S. flag that is hung in Anthony’s display.

Drawn in his hand-etched style, the design invokes the rugged nature of the chainsaw carvings while also symbolizing the compassion that motivates Anthony in his life and in creating each carving for his fellow Marines in their families.

As the end of the project was nearing, Andy stopped during his break while on duty to see how the project has was going.

After hearing the design concept he shares how important he feels Anthony’s carvings are.

“It keeps the dedication and memory of sacrifice alive,” Andy states.

Not representing one specific individual, Fish and Anthony hope that the depicted XVII carving will give comfort to the many families who feel the loss of their loved one every day, letting them know that they are not and will never be forgotten.

Support Anthony and help share his message by purchasing the “XVII” products designed in collaboration with Fish: 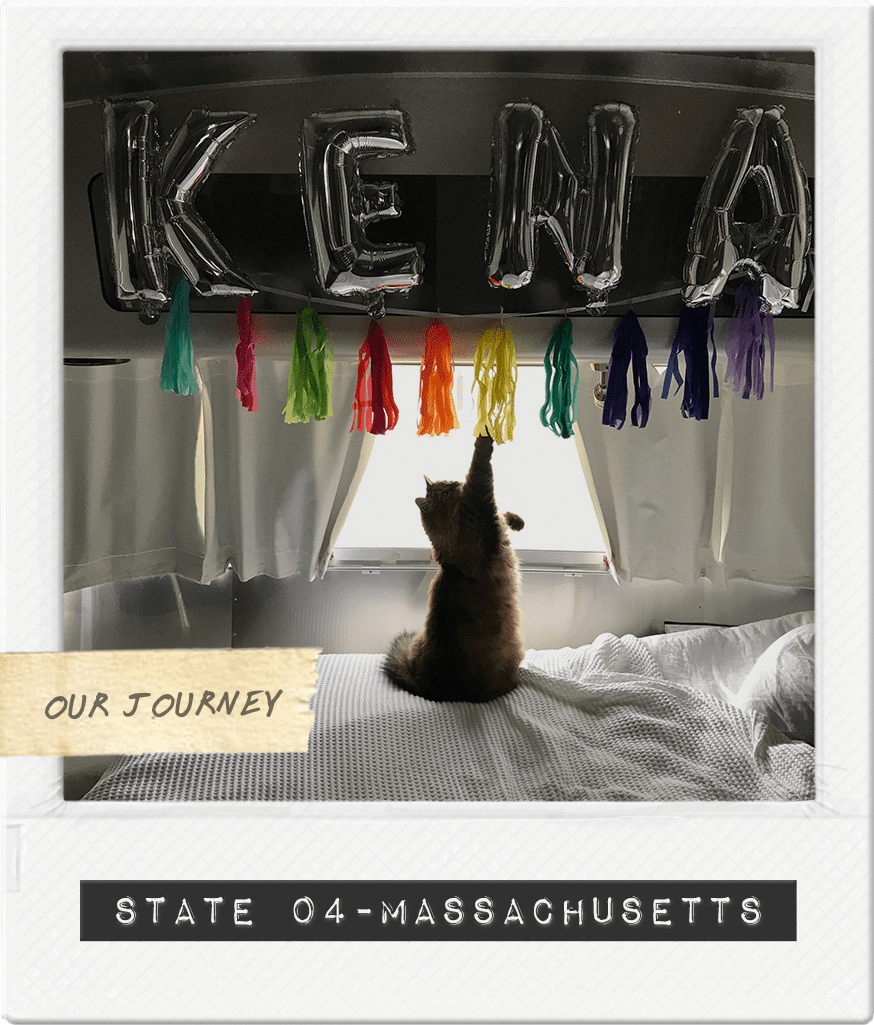 We stopped at a Walmart in Plymouth for the night where I, um, well I had a moment. The next day was my birthday and it was the first time spending it away from my family. I found myself crying in bed while blowing up said balloons. The next day I was able to look back on the hilarity of it, crying in a Walmart parking lot…