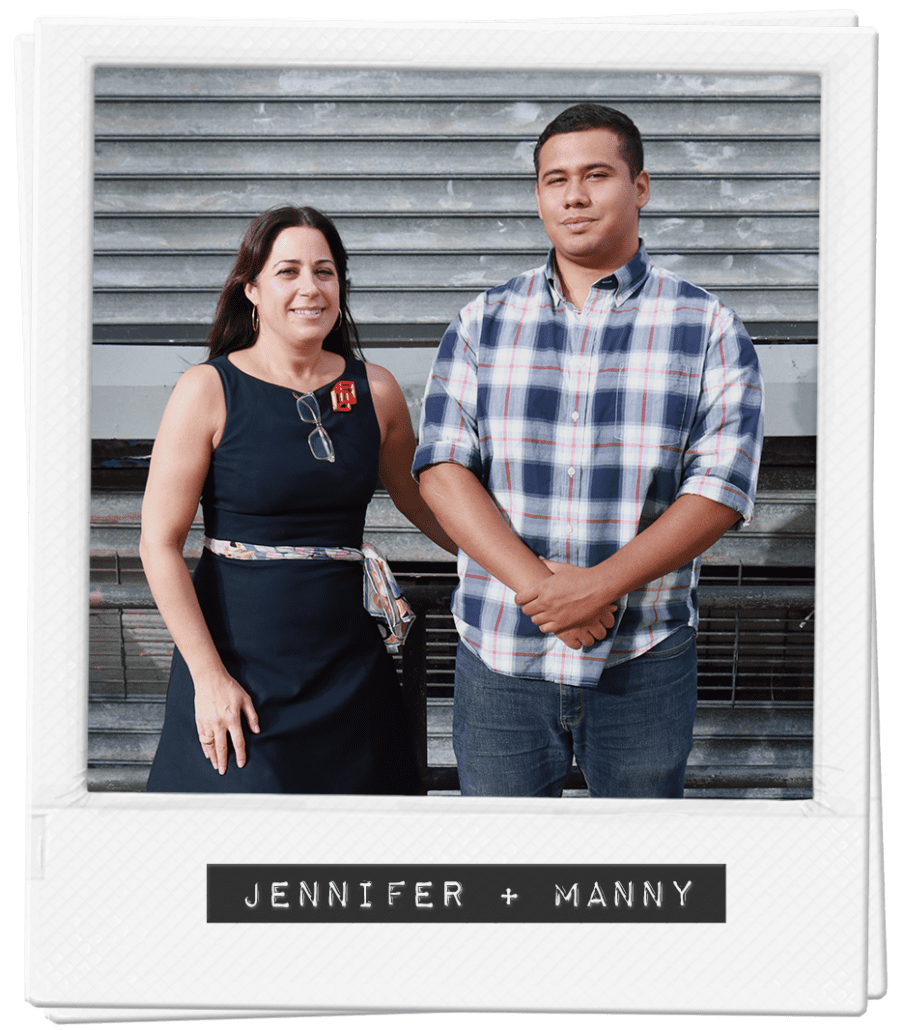 U.S. Army Veteran Manny Galvan collaborated with Jennifer Bernstein, Rutgers Newark professor and Principal/Creative Director of the agency Level, to create “And So It Goes,” an illustrative expression of Manny’s pragmatic outlook he cultivated while serving as a medic.

Both avid readers, the pair bonded over their mutual admiration of Kurt Vonnegut’s novel Slaughterhouse-Five. Manny has a particular affinity for the saying “so it goes” from the novel, feeling that it represents how he wishes to accept life’s occurrences for simply what they are. Wanting to personalize the popular phrase as well as allude to life’s continuity, Jennifer added the introductory word “and” and replaced the letter “T” with a medical cross to represent Manny’s experience as a medic.

On the patch and on the back of the t-shirt, the U.S. flag is superimposed within the medical cross, reflective of Manny’s patriotism and pride as an American. The flag and the cross is slightly off set, making it open to interpretation. For Manny, who wanted to convey that “Veterans are simply just people with a slightly different path than most,” the off set motion could allude to the similarities among Veterans and civilians and the potential to unite. 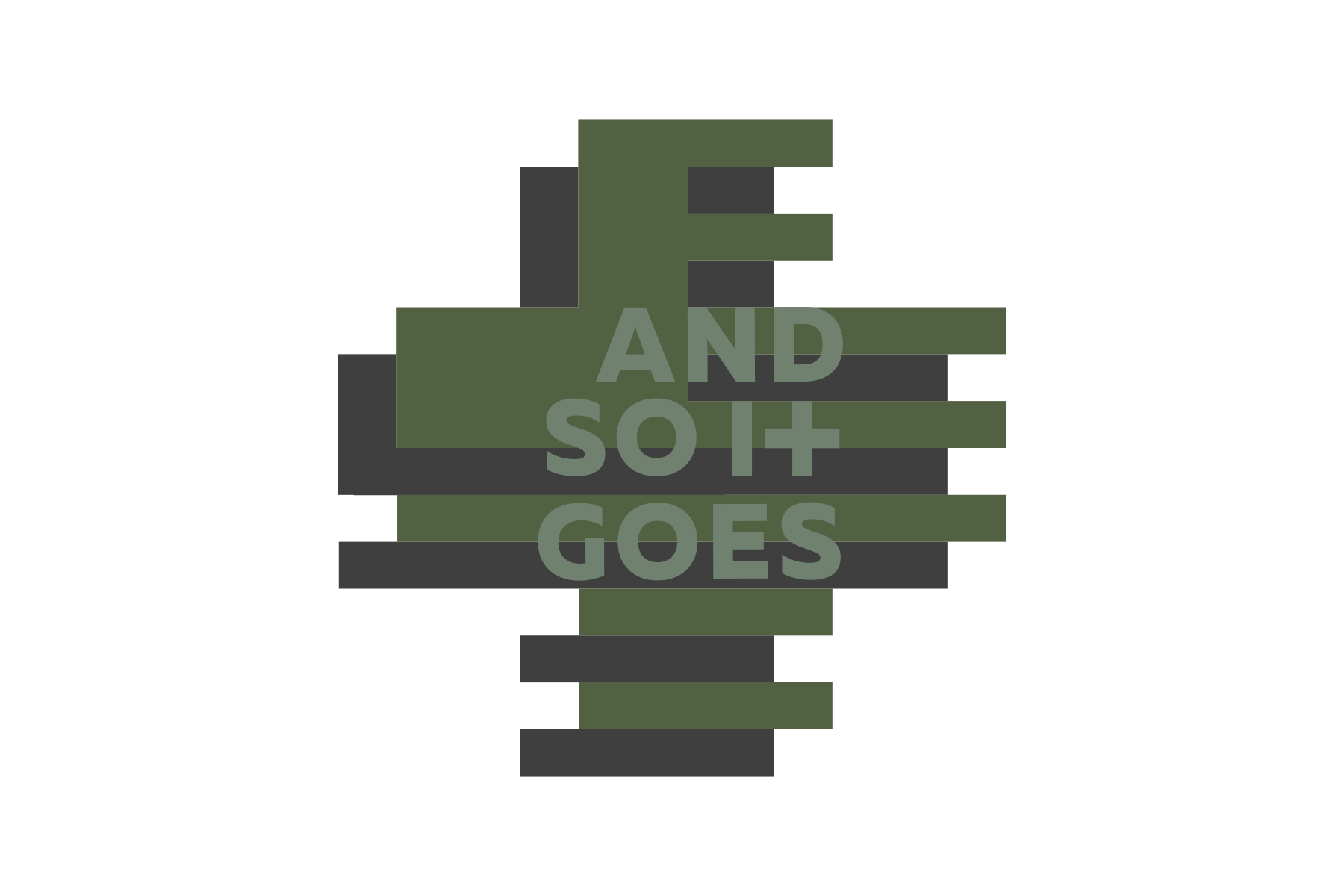 In collaboration with Alpha Industries, the designs from the 50 States: Veterans + Artists United tour are produced into a limited number of fifty t-shirts and embroidered patches. Click the product images below to purchase Jennifer and Manny’s collaborative “And So It Goes” design exclusively on AlphaIndustries.com. 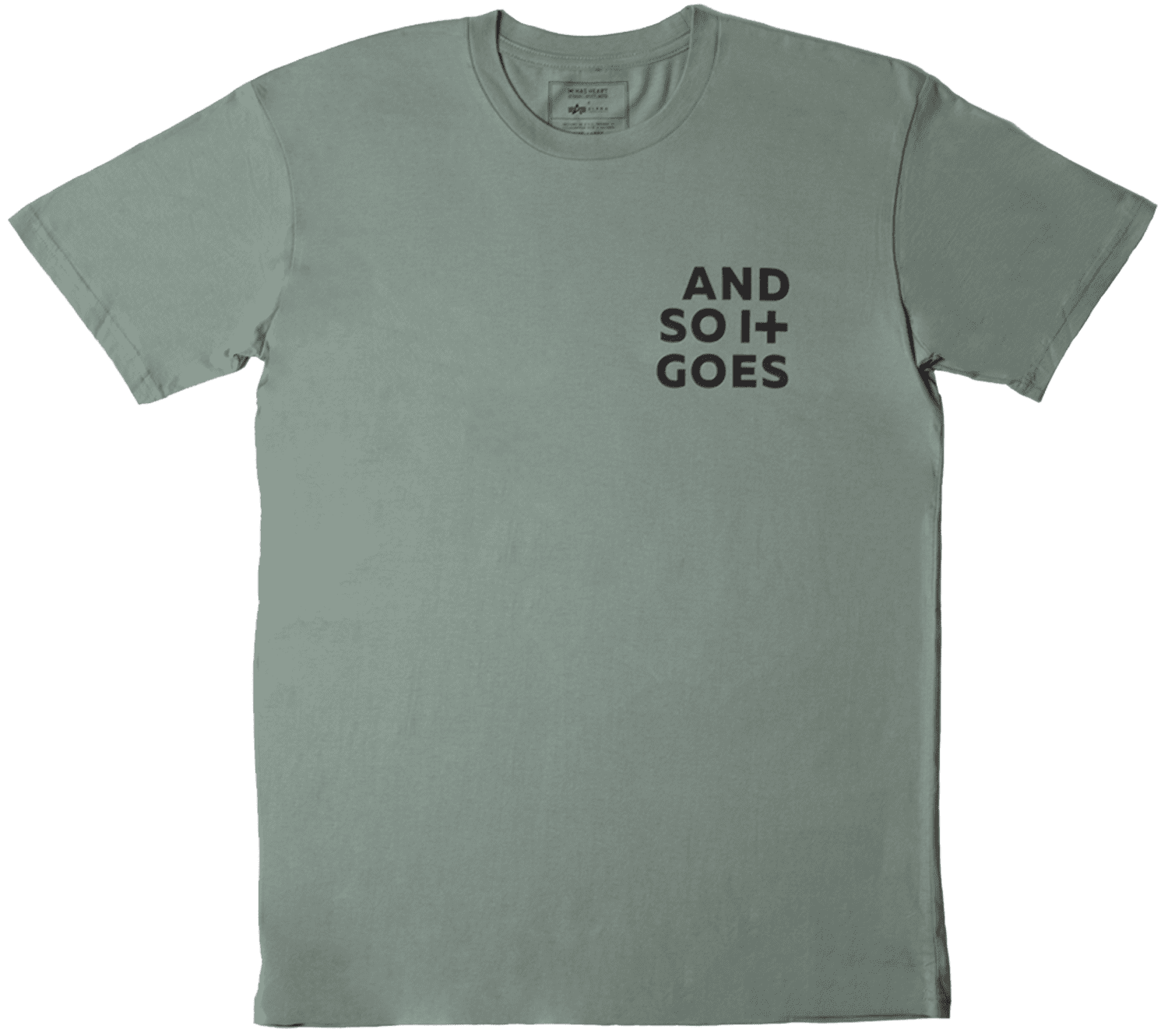 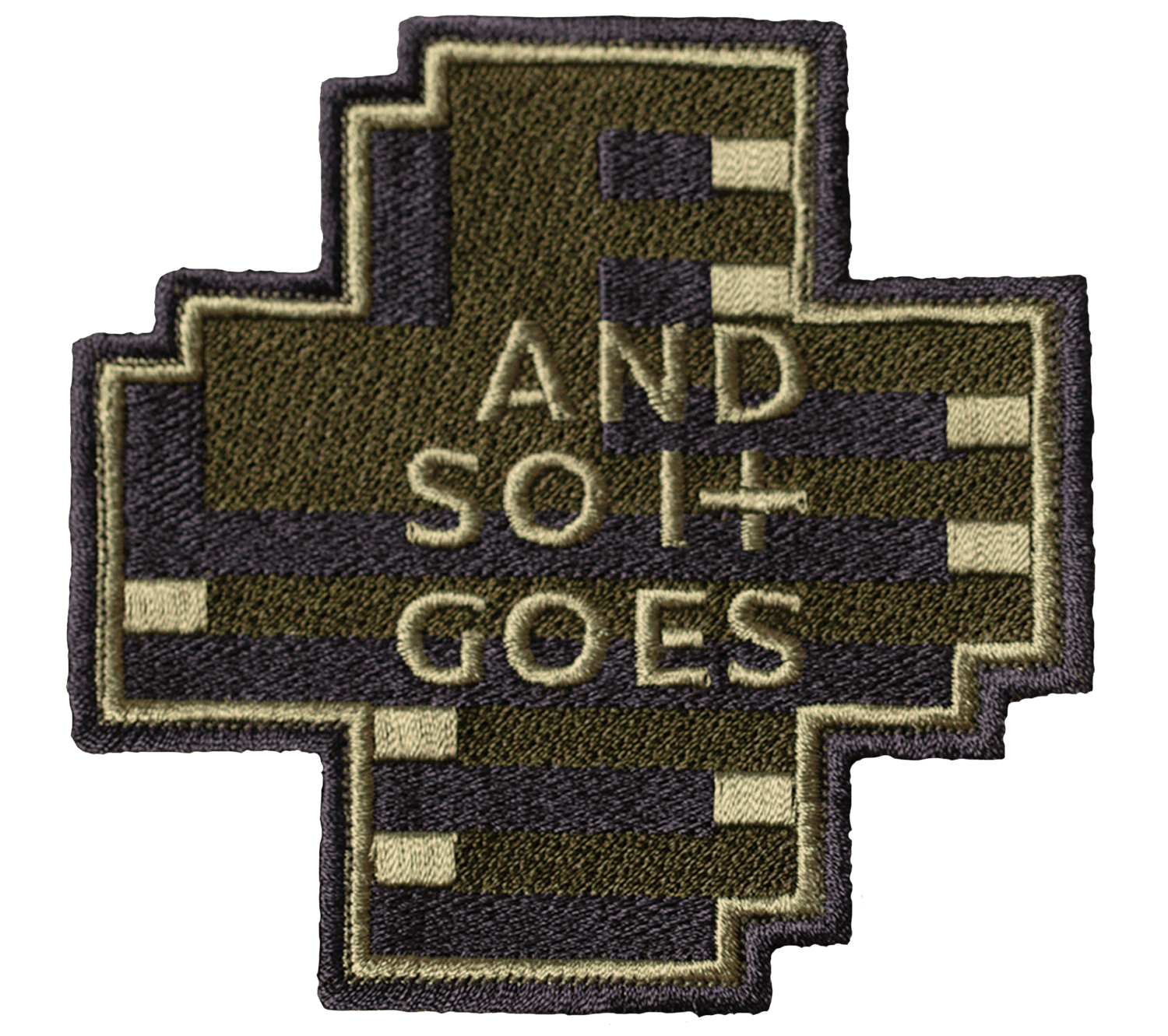 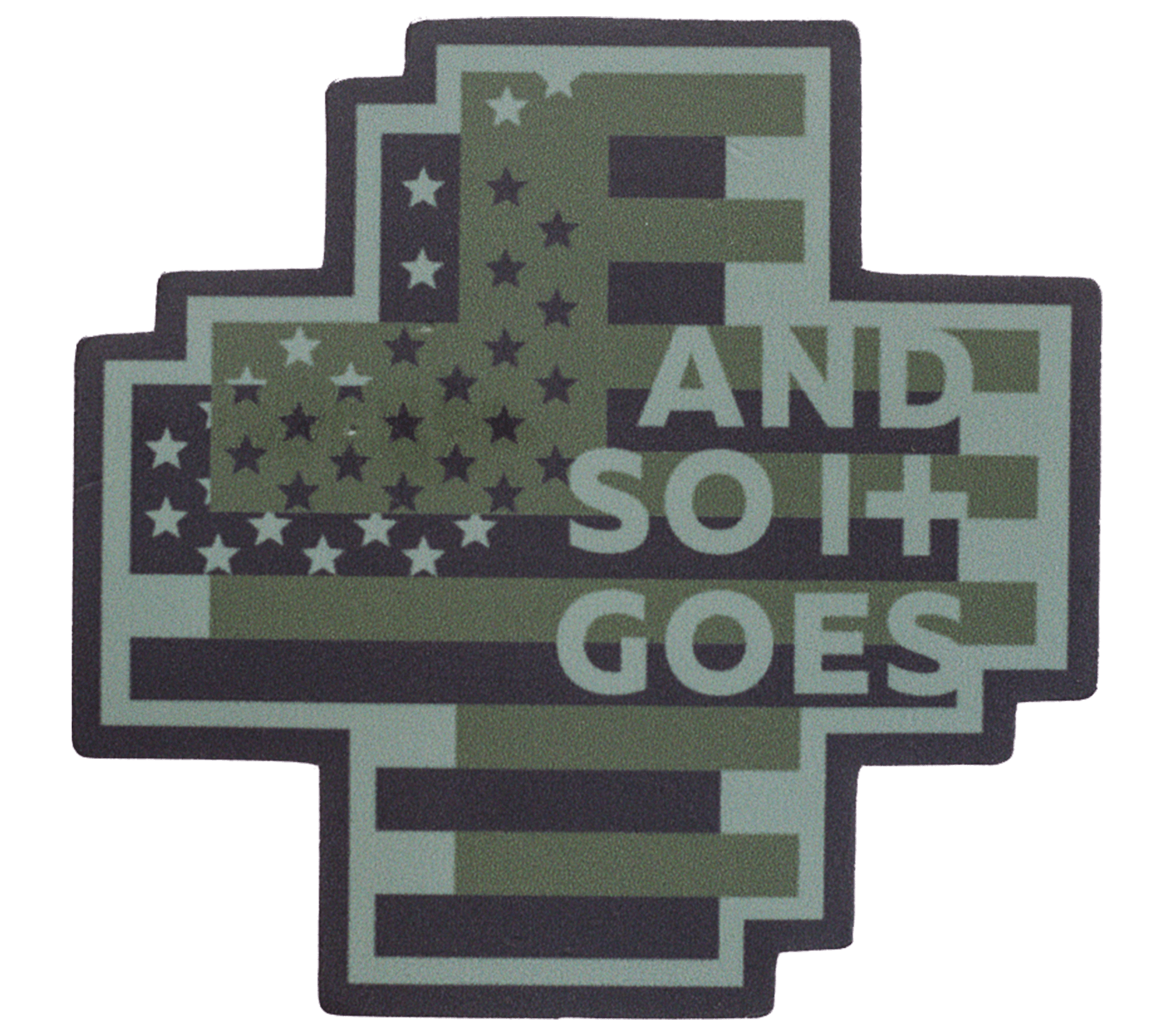 Manny, an Army Veteran, Rutgers undergrad student, and from southern California, is tall, dark, and reserved. Meeting on the outside terrace of the old Hahne & Company department store, recently renovated into a multi-use complex, the pair introduced themselves.

Voted as one of the best 4-Year colleges for Veterans by the Military Times, Rutgers University has multiple locations throughout New Jersey, including at Express Newark where “artists and community residents collaborate, experiment, and innovate in partnership with Rutgers University – Newark faculty, staff, and students with the goals of engaging in public work, creative practice, and democratic dialogue in order to promote positive transformation.”

Part of the Graphic Design program within the facility, Jennifer introduced us to Express Newark who graciously agreed to host our two design days for the New Jersey project. Soon after a quick introduction over coffee, we headed over to one of the artist studios of Express Newark. Looking around, it was a clean slate. Surrounded among crisp, white walls and on the barren, concrete floors with views looking out to the city, Jennifer and Manny sat across from each other and began.

With a background of volunteering at hospitals while in high school, Manny joined the Army in one of the country’s largest military recruitment centers in Los Angeles. Nineteen-years-old, attending a local community college, working full-time, and living at home, he began feeling stifled and wanted to get out.

The Army’s response? “Yeah, we can get you out of here in six months? What do you want to do?”

“I selected the second-most popular job in the military: healthcare specialist. It’s a very vague term. My first unit was Troop Medical Center (TMC), the rooms were designed for basic trauma and we’d go 24 hours without sleeping. My job was to evaluate, stabilize, transport, ambulances, helicopter assets, etc.”

Although he would deny any altruistic suggestions for joining and specifically as an Army medic, he mulled over Jennifer’s question regarding his inspiration to enlist.

“I guess I do have this sense of pride, to keep going, to keep giving back. I am a first-generation born and I really feel like you can do anything here,” he reflected.

Manny spent months in boot camp and training, first finishing basic training, then moving onto infantry training, and next receiving his certification to be on a combat medic team.

When Jennifer asked him what the process was like, he responded, “The military is collective learning. It’s information that is passed down from person to person to person. There’s a question a lot of NCO’s (non-commissioned officer) have asked, ‘how long do you think of what you taught will stay in the military?’ Everything gets passed down.”

Jennifer, who often works with information design, quickly picked up on how technical Manny’s mind functions: the way he lists dates, how he envisions information traveling, and how he would rather describe facts regarding the military than talk about himself.

“I’m a very private person. I don’t tell people a lot of things. I just won’t. I’m into facts. I’m not really big on feelings. I’m into stats that tell a story,” he would later describe. Respecting his privacy, she asked of his interest in stats.

“I got into analytics from basketball stats,” he said. “There is so much information out there and you learn that stats aren’t always indicative of outcomes, so I started with that. Eventually, I learned in my economics class that there’s a huge section of academia dedicated to this.”

As he went on, you could recognize the appreciation he had for intellectuals and specifically, the respect he had for the academic sitting in front of him: Jennifer.

In addition to stats and basketball, other interests of Manny’s are his involvement in the Rutger’s Veterans’ House, watching all sorts of television shows and movies, scrolling Reddit, and reading. He even toyed with the idea of becoming a screenwriter due to his love of words.

An avid reader herself, the two discussed their favorite books together, eventually landing on Kurt Vonnegut’s Slaughterhouse-Five.

He pulls up his sleeve to show Jennifer his tattoo of the words “So it goes,” a phrase repeated throughout the book. “Death is just a different form of life,” Manny shares. “Everyone I’ve worked on, lived,” he goes on to clarify. “But, I’ve lost a lot of people.” Stated in almost the same manner he had used earlier to describe the history of paramedics, he doesn’t elaborate any further.

And this isn’t shared to present Manny as a hardened, desensitized Veteran, because he’s not. Like all of us, he’s just trying to figure out his way through life and, with the help of Vonnegut, he’s found a manner of acceptance for whatever life presents. He chooses to focus on what he can analyze and control rather than what he cannot.

This adopted mentality, however, was a process. Transitioning back into civilian life during his first semester at Rutgers, Manny found himself pretty angry. “I don’t know why, but I was. Also, for no reason. I don’t know, I just didn’t really want to be around other people. So I had to build and work on that. I made the friends that I made and they’re telling me they went through the same things I did. I definitely had to take steps through that. I’m really glad I had the network to do that and be part of that network now,” he says to Jennifer. “Wholesome people don’t do what we do. We’re [Veterans] fucked up in a certain way.”

Jennifer slightly grinned. “We’re all a little fucked up,” she responded. Not said to diminish his statement or the experiences of Veterans, it was, rather, a moment to further connect. As reserved and private as Manny is, Jennifer wasn’t going to let the opportunity pass.

He nodded. “Yeah, I guess we are just people. We’re just people who have done war. We have unconventional pathways, but we’re still people. We have just lived our lives differently than most,” he states.

“You see the military like, there are rules and orders, but it’s much more nuanced. You’re humans; there are emotions. There are parallels, the civilian and military lives. How do you think we make this connection?” Jennifer asks Manny.

He pauses and thinks.

“Come talk to me,” he responds.

“I feel that the design should demonstrate that we aren’t so different, to see the commonalities, to not put you on a pedestal,” Jennifer says while brainstorming. “It’s just that you’ve seen some shit most people have not.”

They sit next to each other, both looking at her laptop screen as she quickly whips out a few rough drafts of a potential design. Impressed with her skill and speed, Manny raises his eyebrows and nods. This, ladies and gentlemen, is what we call the New York’s fast pace of life.

“I think it’s a great goal to try to make the connection with this shirt and I think something typographic would be something cool to do since I work a lot in typography and you read a lot. You also have two tattoos having typography,” she says while working. She types out the words “So it goes” onto the screen.

After thinking for a moment, Manny elaborates on the intention of their design, “Yeah, I think the takeaway from the design would be to give more of a realism to the experience of being a Veteran.”

The pair goes on to discuss different imagery relating to the Army and his experience serving. He explains the importance of being called “Doc” and the level of trust that comes with that term. Recognizing the pride of his role as a medic, Jennifer changes the “T” in “so it goes” into a medical cross. It will be Manny’s personal touch on a saying many, particularly many Veterans, have an affinity for.

Wanting to further personalize the design for him, Jennifer suggests adding an “and” to make the saying “and so it goes” instead, a nod to Manny’s view on the world’s reciprocity and continuous nature. The two agree it makes the saying seem less conclusive.

A symbol of unity, for both civilians and the military, the pair discuss the United States flag. As Manny described the importance of the flag’s position on military uniforms, seeming backward but, in actuality, placed intentionally so the stars are always marching forward, Jennifer related it again to an idea of connectedness and continuity. “It definitely symbolizes either military or civilian life, or both.”

Proud to be an American and of his service, it’s clear Manny appreciates the inclusion of the U.S. flag. He is careful, however, of not seeming too proud. “It was a job… I’m not a hero… if I could do it, anyone could do it,” he lists. “It does bother me when people say, ‘well, I would have joined the military but…’” he tells Jennifer.

“They’re probably trying to connect with you,” she replies frankly.

A little taken aback, he sits there silently for a few moments, mulling over this new idea.

“I never thought of it like that,” he finally says.

After the two design days, Jennifer took their ideas and finalized the design. Sharing the series of potential designs with Manny via email, she did not hear back. Eventually and unfortunately, he shared the news of his father passing with us. Over the months, he has transferred from Rutgers and moved back to California to be closer to his family. We haven’t received a response since then. I’m sharing this information because things like this happen: so it goes. Yet, “AND so it goes.” A seed of hope, we hope Jennifer’s addition of “and” to the saying will remind Manny of that potential for connection. Additionally, we hope the word will inspire civilians to take that step in connecting with Veterans. In those moments of silence and unresponsiveness, it’s on us to continue trying. That potential to unite is always there.

Support Manny and help share his message by purchasing the “And So It Goes” products designed in collaboration with Jennifer: 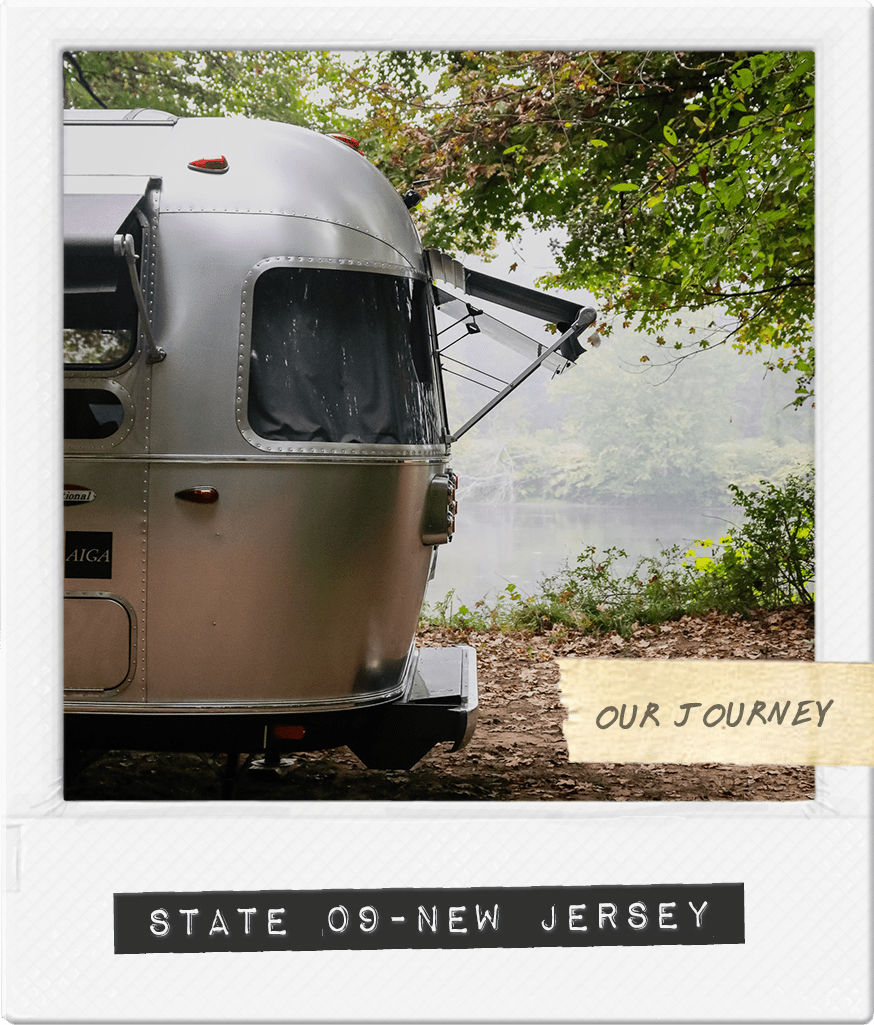 Right on the border of Pennsylvania and New Jersey, we found our little end-of-summer sanctuary. It was mid-September, the warm days were fleeting, and I wasn’t quite ready to say goodbye to my favorite season. With some spare time before the state project, we drove through rural New Jersey to get to the wilderness of the Delaware Water Gap…