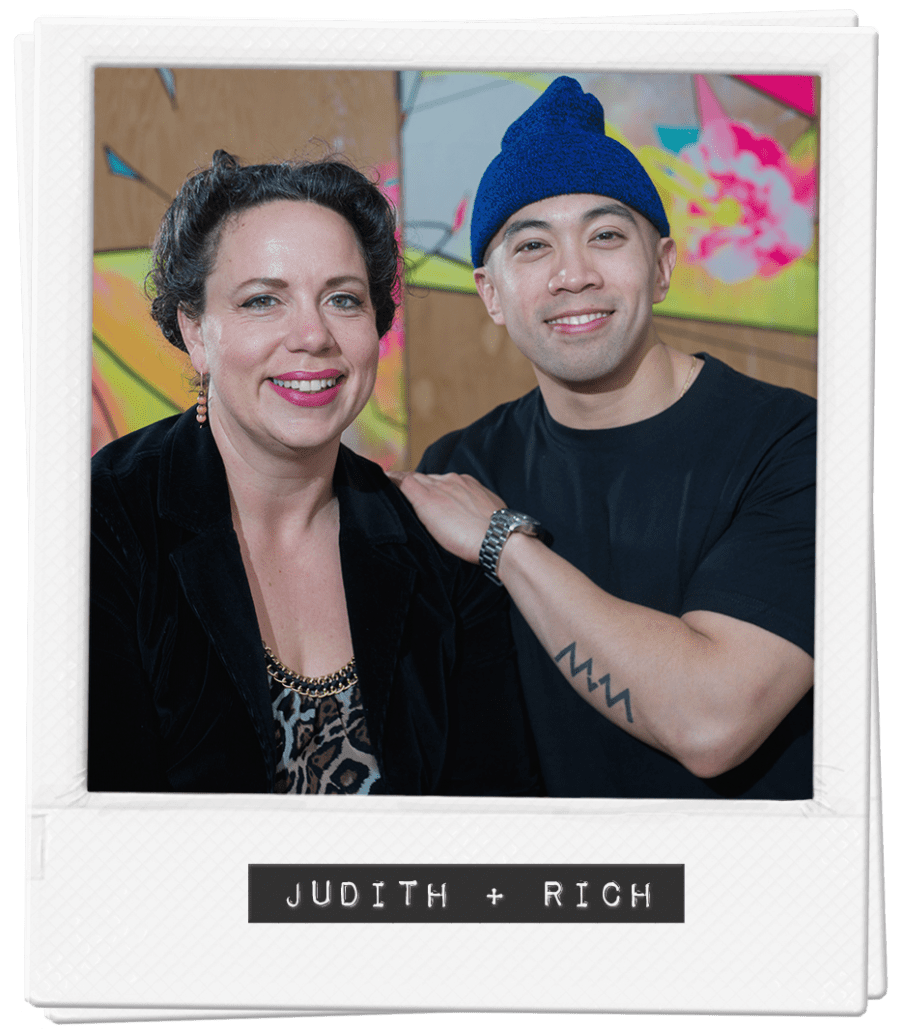 After years of feeling subdued, Army Veteran Judith Burger does not have the time or energy to remain silent. Fiercely against apathy, Judith encourages others to speak their truth by being bold. Through her Veteran advocacy and work with the Veterans of Foreign Wars (VFW), Judith began healing from her injuries by putting herself out there and speaking her mind. Her dedication to service derives from heritage and close relationship with her grandfather, a Veteran and two-time POW during WWII. Through her involvement with the Central Oregon chapter of the Patriotic Pinups, she continues her work in Veteran affairs as well as claims her femininity in a military world that is often perceived as masculine.

With winding cursive, Judith’s “Be Bold” design emotes her strong femininity. The design features her officer cap to represent her dedication to service and Veterans while also alluding to her healing process through working with the VFW. With her affinity for WWII insignia and retro style, the design features an Army star in between the date she enlisted (left) and her VFW membership number (right). Lastly, the design is detailed in bright red, serving as another reminder to be bold. 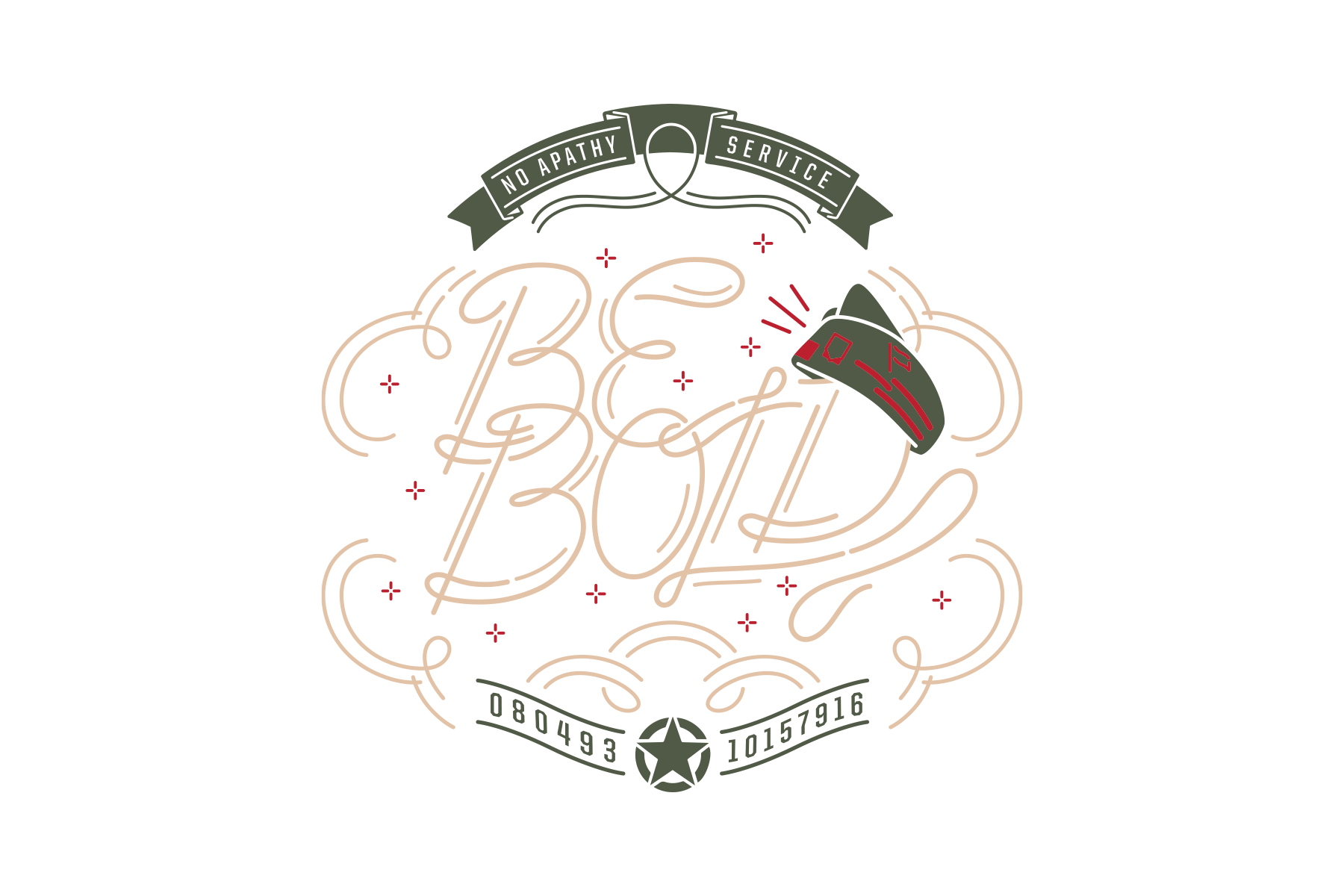 In collaboration with Alpha Industries, the designs from the 50 States: Veterans + Artists United tour are produced into a limited number of fifty t-shirts and embroidered patches. Click the product images below to purchase Judith and Rich’s collaborative “Be Bold” design exclusively on AlphaIndustries.com. 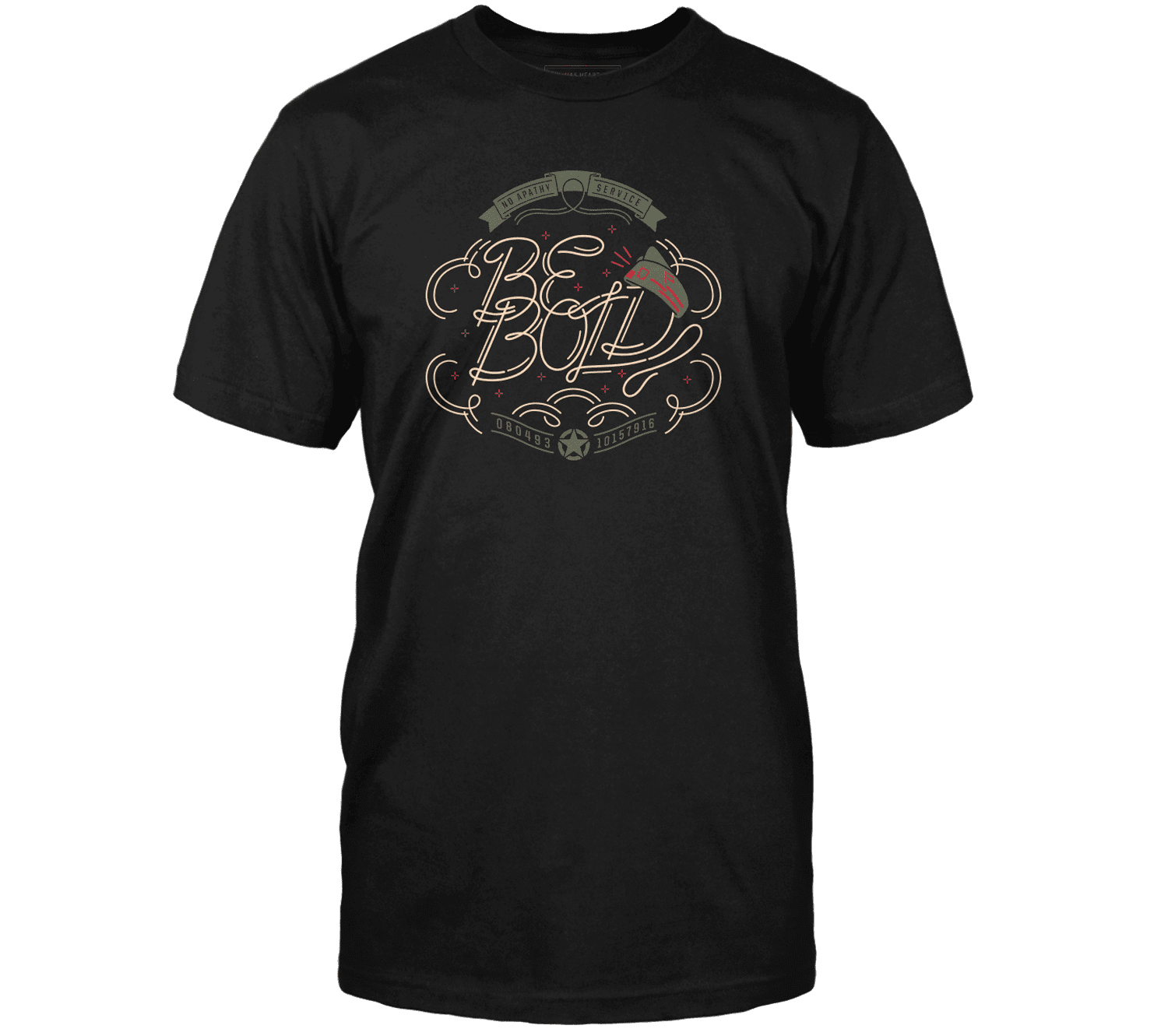 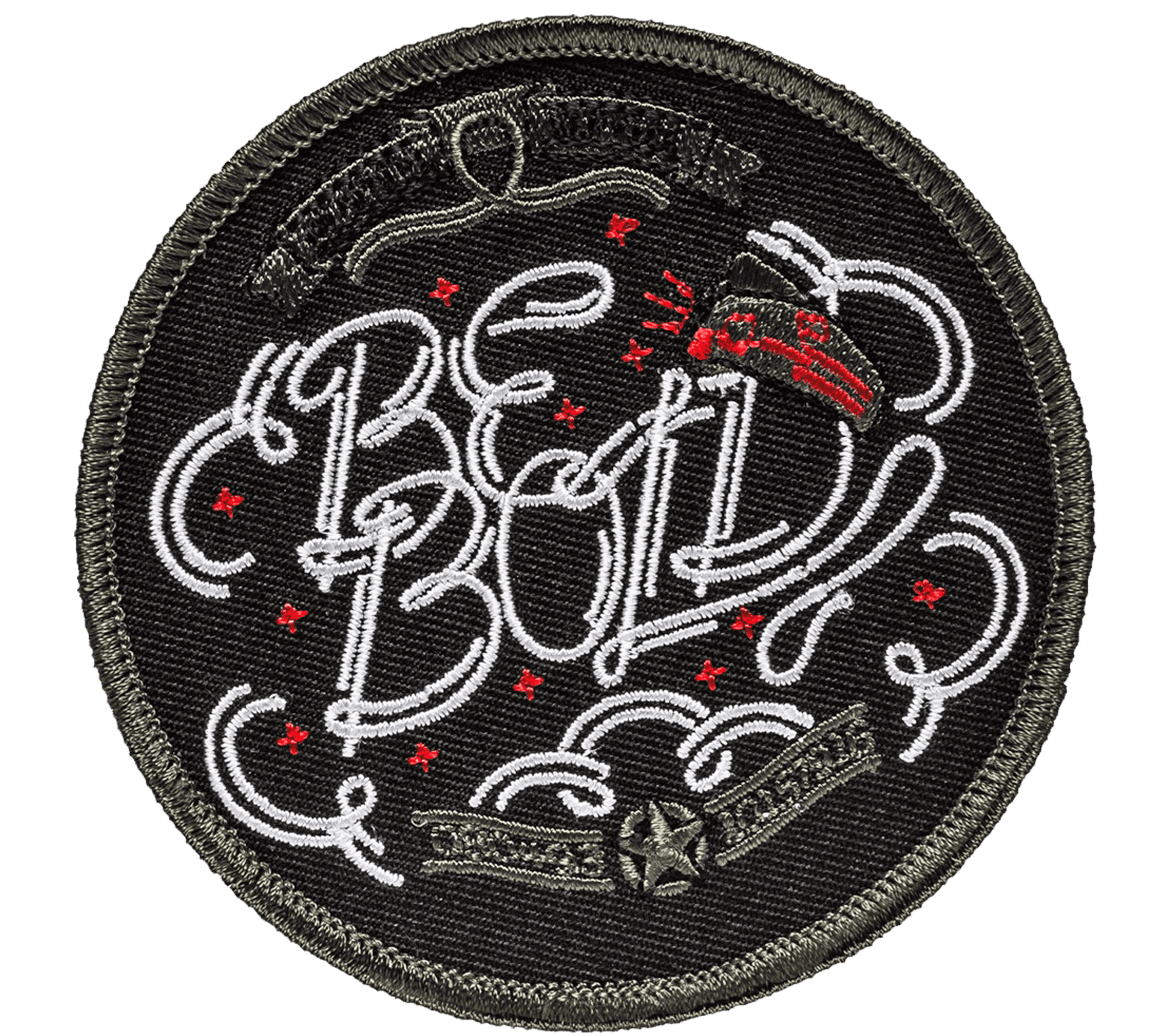 Before immersing themselves in the creative haven that is the Blue Ribbon Studio on Nike’s Beaverton, Oregon, campus to work on their collaborative design, Army Veteran Judith Burger and then-Nike designer Rich Tu met over coffee at the Decathlon Club just across the street.

The barista, having gone to a New Kids On The Block concert the previous night, was belting out “Step by Step” while the two greeted each other. Albeit a tad distracting, it was an energizing (caffeine aside) and ideal environment to meet a stranger.

In a sea of monochromatic colors hustling and bustling in and out of the café, Judith was easy to spot.

Wearing a bright red dress and a matching fiery-flame bandana, she later would explain she purchased the dress to wear for the project as reminder to herself to be bold.

The pair share a welcoming yet shy embrace as they meet and sit down for introductions. Their timidity is cut short as both jump in introducing themselves.

Judith served in the U.S. Army as a Specialist EF in the 702nd MSB (Mobile Support Battalion) 2nd Infantry Division, and drove a five-ton truck during her deployment in South Korea. 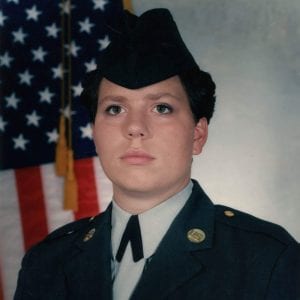 While serving in South Korea was a difficult time for her, she fondly remembers her role as a female truck driver and can now see it as a representation of her  “balance of femininity and masculinity,” a balance she had struggled with while serving.

Later medically discharged due to PTSD, depression and cerebral pressure, Judith transitioned to the civilian world having to relearn how to be herself again, speak her truth, and be bold.

Growing up in the small town of Bend, Oregon, Judith and her sister were encouraged by their parents to be audacious and speak her mind. She attributes her “great childhood and supportive parents” as the foundation and seed for her bold character. The daughter and granddaughter of Veterans and a teenager wanting to get out of town, Judith enlisted in the Army.

“In the military, you think you would be bold, but really, you aren’t allowed to be,” she explains. “I learned to hide and subdue it.”

Judith pauses for a moment, taking in a deep breath.

It is clear some painful memories come to mind. She goes on to explain that she was assaulted three times throughout her service and that eventually, everything she did felt like a challenge, as if she was stuck.

Out of the military, Judith was in an abusive marriage in which her voice was constantly silenced.

“Internally and honestly, I’m bold,” she confidently states. “I don’t want to be told I have to subdue that.”

Although her PTSD, depression, and cerebral pressure are realities she will live with for the rest of her life, she is at a point where she can look back and quote Godsmack, “I am doing the best I ever did.”

She inhales and sits up straighter. “Don’t lock yourself up and don’t allow others to put you in a place where you don’t want to be.”

In that moment, there was no doubt that her boldness was not only back, but also infectious. It was then that Rich stopped scribbling notes, picked up the red and black dry-erase markers, and writes the word “BOLD” on the dry-erase tables they were sitting at.

He underlines it and they both stare at it.

Rich’s eyes divert over to her arm and breaks the moment’s focus.

“Can you tell me about the paw print tattoo on the inside of your wrist?” he asks.

She casually responds she got it when she was a zoo keeper at Busch Gardens, where she would, as a bear cub specialist, take bear cubs to school classes to educate children. Working in Wildlife Biology, she had the opportunity to work with a variety of animals. She recalls her time rehabilitating corvids in which she would take the crows on a car ride and be very vocal with them until they would recover and begin to fly.

“This work became a part of my healing,” she states.

Judith’s compassion is a testament to her softer side. She cares; whether it is for bears, corvids, her beloved vegetable and sunflower garden, her family, or Veterans, Judith is there. She turns her back to Rich, showing him another paw print tattoo on the back of her neck.

“This is a badger paw; it was about finding my voice,” she explains. “Badgers are protective and aggressive like I can be; I’ll just about fight for anyone that needed it.”

For Judith’s softer side there is her aggressive side, both fueled by her passion for caring and protecting others. That is precisely where Judith has found her niche, protecting and advocating for her fellow Veterans through her work with the Veterans of Foreign Wars (VFW).

“I went to the Women’s Veteran Conference with my sister who had just come back from Iraq and there was the VFW,” she explains to Rich.

“Because my Grandpa was a member, I knew I could join, but I just felt like I didn’t belong, thinking it was a old-man’s club. The post-commander there are the time, however, told me I did belong and that I had something to offer, so I joined under the condition that I would quit the first time something pissed me off,” Judith laughs.

It was through her work with the VFW that she continued her healing and getting better, she explains. She transitioned from feeling locked up and stuck to being “out there,” giving passionate speeches to hundreds on behalf of her fellow VFW members.

Reaching for her cell phone that was sitting nearby, Judith then slides through images of her giving speeches for Rich to see. In the images, Judith stands firm with sense of conviction on her face and representing the VFW with her uniform cap.

“Wow, look at you!” Rich comments.

While continuing to tap through the photos, she then shifts gears to images of her in retro clothing, her hair curled in rolls, bright red lipstick on, and in a traditional pin-up stance.

The swift transition of her as a passionate speaker to her as a Patriot Pin-Up was the embodiment of Judith: strong, feminine, and bold.

Her involvement with the Central Oregon Patriot Pin-Up group is recent, but she explains to Rich that, combined with her work with the VFW, it has helped with her ongoing discovery and acceptance of having both feminine and masculine attributes. It has also helped foster her appreciation of WWII’s retro military style.

Having a close relationship with her grandfather, a WWII Veteran and two-time POW, Judith explains to Rich that she grew up listening to his stories of fighting in Nazi Germany, being captured twice, and miraculously escaping twice.

In his second imprisonment, his family was actually told that he had been killed-in-action, later finding out that he had escaped three days before the German surrender, weighing a mere 84 pounds.

As he listened to Judith’s love and appreciation for her grandfather, Rich mentions that his grandfather was also involved in WWII. A proud first-generation American, Rich’s family is from the Philippines where his grandfather worked on American military bases during WWII.

“There’s always something that connects us,” Judith responds and smiles.

That’s what she aims to do in her work for the VFW and in her life, find connections and bridge people together through being active within their community.

She goes onto describe why she enjoys bringing Veterans together through her work, explaining the drastic changes throughout U.S. history and how during WWII, it seemed like everyone went to war, yet through the years with lessening military participation, Veterans need to reach out, find one another, and remember that they are not alone.

Judith is a staunch advocate for finding connections through patriotism. Patriotism to her isn’t blindly supporting one’s country, but supporting the US in the freedom of “taking what you believe in, and putting it out there; don’t be apathetic.”

When the time came to begin taking Judith’s journey and message and conveying it in a design, Rich noted the overarching theme of Judith’s boldness and dislike for apathy.

She agreed in that she encourages anyone and everyone to be bold, to share their voice.

In a style of free-hand script inspired by the WWII hand-painted nose art on aircrafts, Rich writes “BE BOLD,” this time in an elaborative cursive with ornate swirls on [HAS HEART] sketching paper.

Judith was taken to the concept, liking the “elegance and the twists,” stating that “these are the things I want to embrace in myself.”

To commemorate Judith’s dedication to and passion for patriotism, Rich decorates the top of the design with a ribbon containing the words “NO APATHY” AND “SERVICE.”

To support Judith by purchasing her collaborative “Be Bold” design with Rich, click to purchase it exclusively on AlphaIndustries.com.