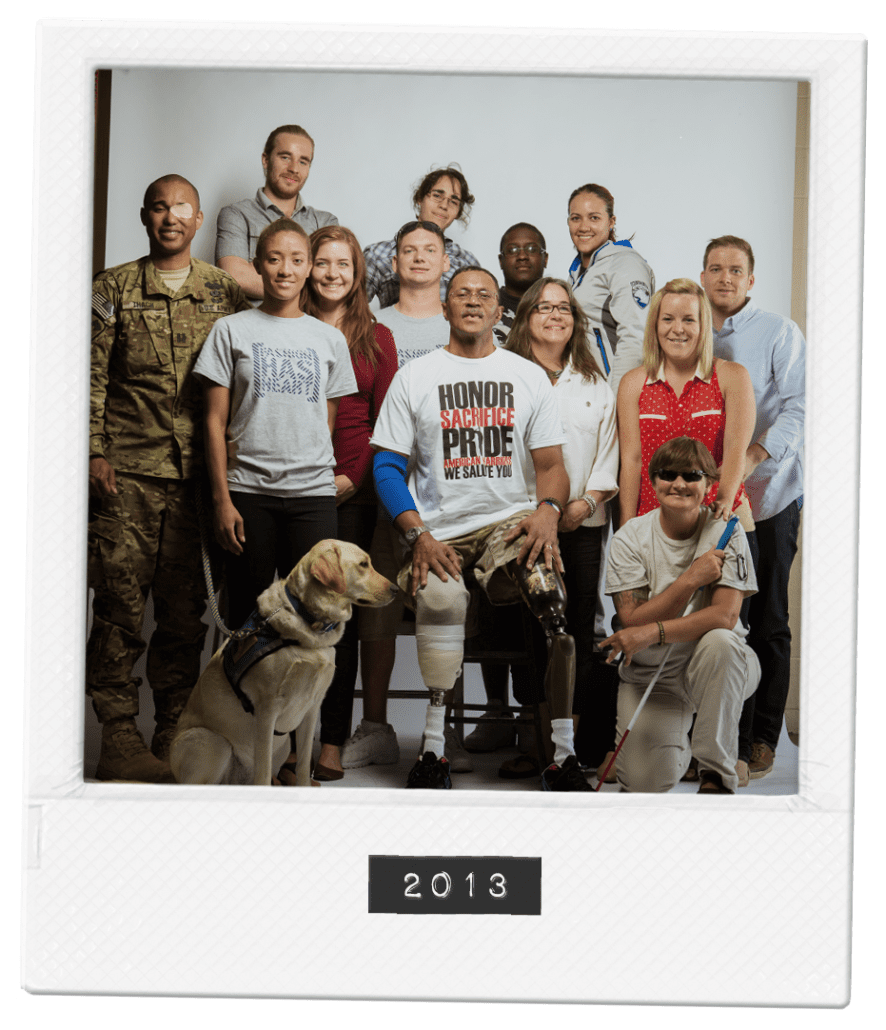 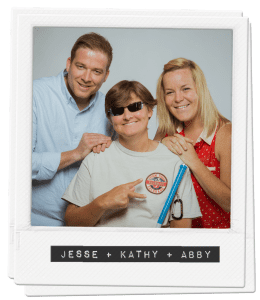 Kathy has college degrees in several disciplines including biology, health sciences, and an MBA in small business administration.

But even with all these accomplishments and skillsets, life wasn’t always easy. When life gave her lemons, U.S. Army Colonel Kathy Champion learned to make the best damn lemonade she could make.

Kathy was medically discharged after serving 27 years due to the severity of her military-related injuries. Kathy became blind and also suffers from multiple sclerosis, a debilitating incurable illness that attacks the autoimmune system and causes extreme fatigue among other symptoms. At her lowest point, she found herself homeless and sleeping on park benches in Florida.

Despite her circumstances and struggles, Champion has bent but not broken. At a much better place in her life, she now climbs mountains, travels the world, goes sailing, bikes, runs marathons, and so much more. Her life’s daily motto is simple, “In all you do, be a Champion!”

Her enthusiasm and smile will light up a room, just like her shirt and boot design. 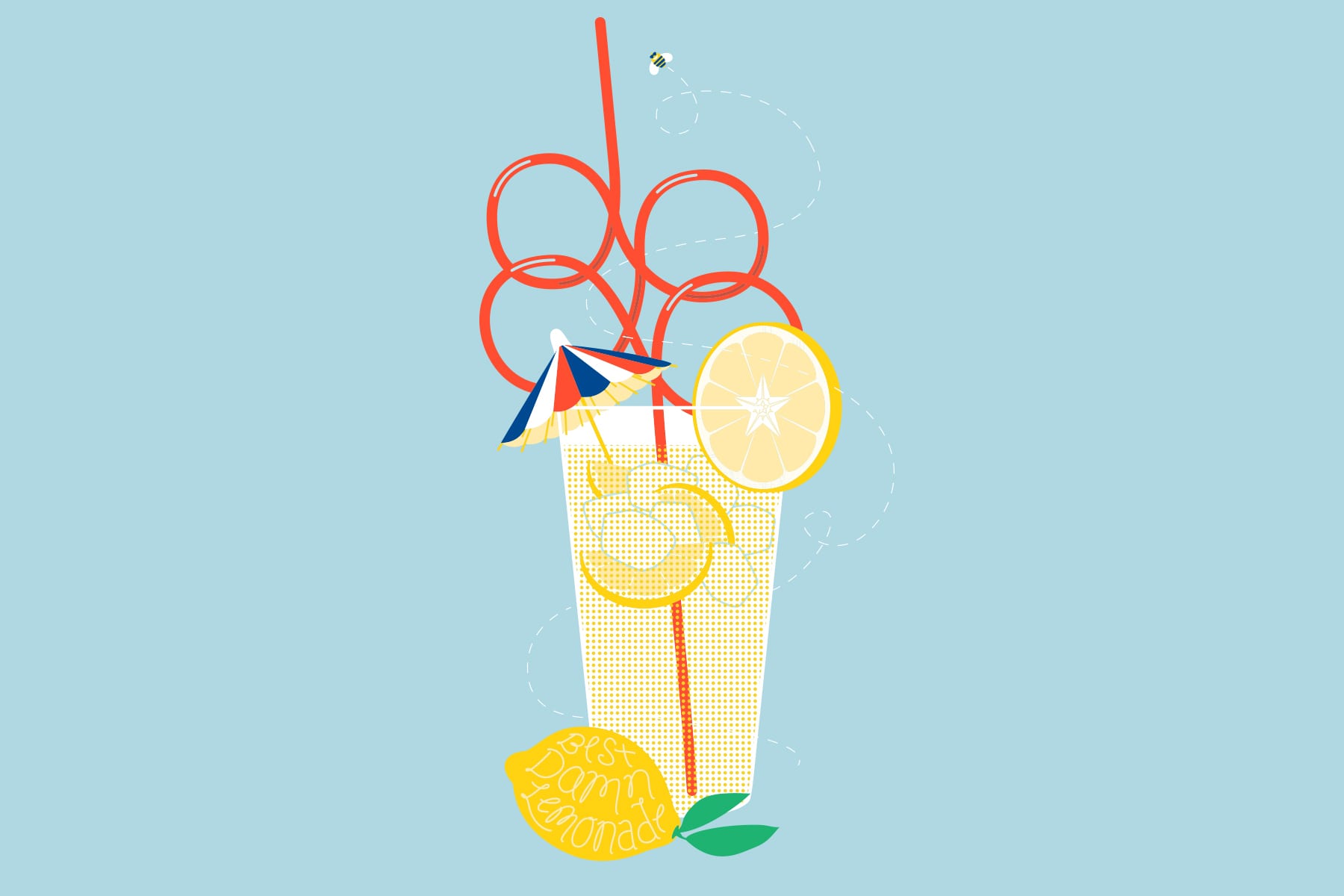 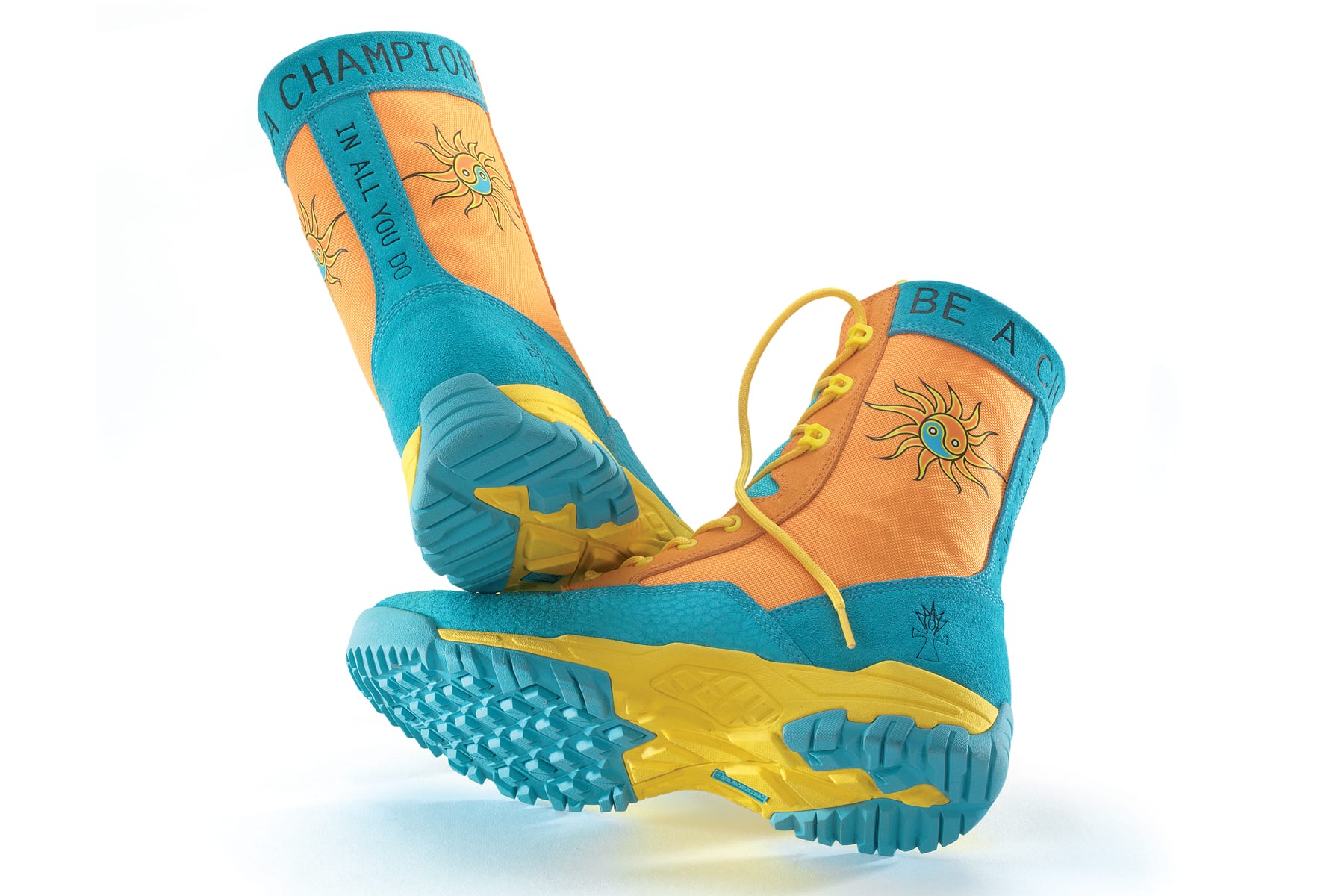 As part of the Alpha Industries x [HAS HEART] capsule collection to kick-off the 50 States: Veterans + Artists United tour, Alpha Industries has produced a limited number of HERO[series] designs into t-shirts, embroidered patches, and jackets. Click the patch image below to purchase “Best Damn Lemonade” via AlphaIndustries.com 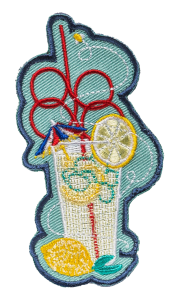 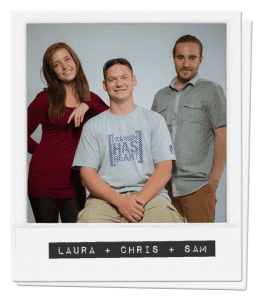 While deployed in Iraq in 2005, U.S. Marine Chris Stephenson and his convoy were hit by IEDs. He was thrown from the vehicle and suffered severe internal and external injuries. His comrades in the vehicle were killed instantly by the impact.

The symbols within his design represent this life-changing moment. The jagged lines represent the splitting of this humvee, while the triangles symbolize how he was launched into the air from the vehicle, which ultimately may have saved his life. The dotted lines are his unconnected memories, the flowers are the daisy chain of IEDs that his vehicle hit, and the swirls are the whirlwind recovery process that will never end for him.

At the foundation of everything, the Eagle represents his U.S. Marine brothers and sisters. No matter who you are or where you’ve been, there’s no place like home surrounded by the ones you love. 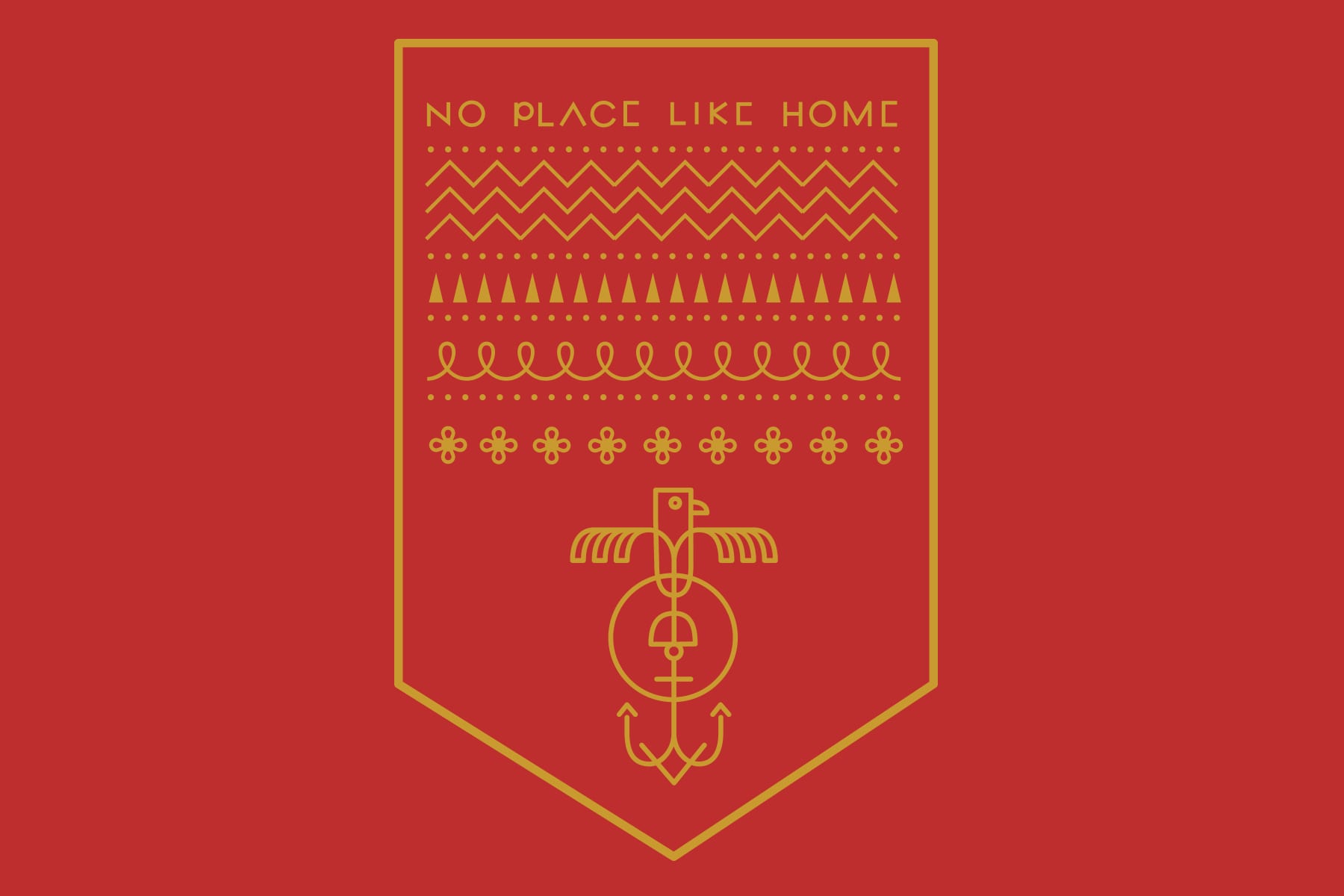 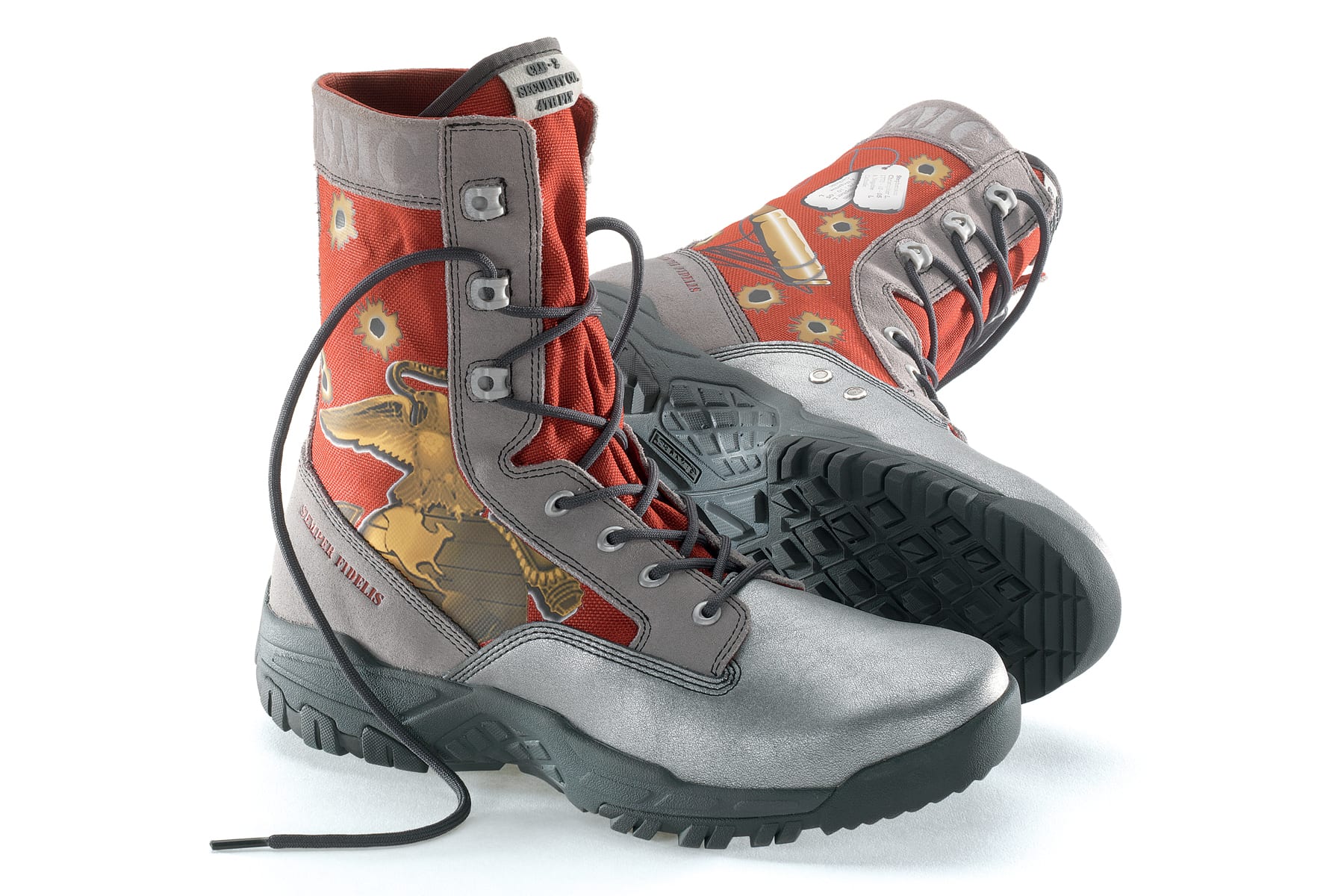 As part of the Alpha Industries x [HAS HEART] capsule collection to kick-off the 50 States: Veterans + Artists United tour, Alpha Industries has produced a limited number of HERO[series] designs into t-shirts, embroidered patches, and jackets. Click the patch image below to purchase “No Place Like Home” via AlphaIndustries.com 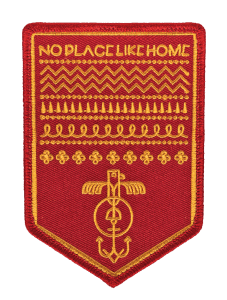 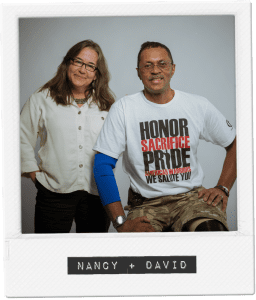 David Nicholson’s legs have taken him to Japan, Guam, Korea, Puerto Rico — just about everywhere, He served 12 years of active duty in the U.S. Navy before going to work at various corporate airlines with his aircraft mechanic skills.

Then he became a private contractor, a job which led him to be deployed to Afghanistan in 2010 in support of military personnel.

In less than a year, 60mm rockets ravaged his base. It killed most of his team members and blew off both of his legs. Now a bi-lateral amputee, Nicholson wanted to not only walk again but he wanted to do a whole lot more… and is.

Despite nearly losing his life during that attack in 2011, Nicholson managed to save hundreds of lives in those moments of crisis.

In hindsight while he was in recovering, he was reminded by others that those hundreds of lives will multiply into an exponential number of lives “rescued” from those initial lives saved. It was this exponential component, “You can’t count the others that will live because of the people that we saved,” that inspired Nicholson’s design concept.

By saving one life, you save an entire line of lives. All of those people are defined by the spaces between them and are connected in an organic structure, living “on the shoulders of the shoulders of others.”

But it’s not only the lives that connect others, it’s also the support that each live gives to the others that really makes for a lasting impact. 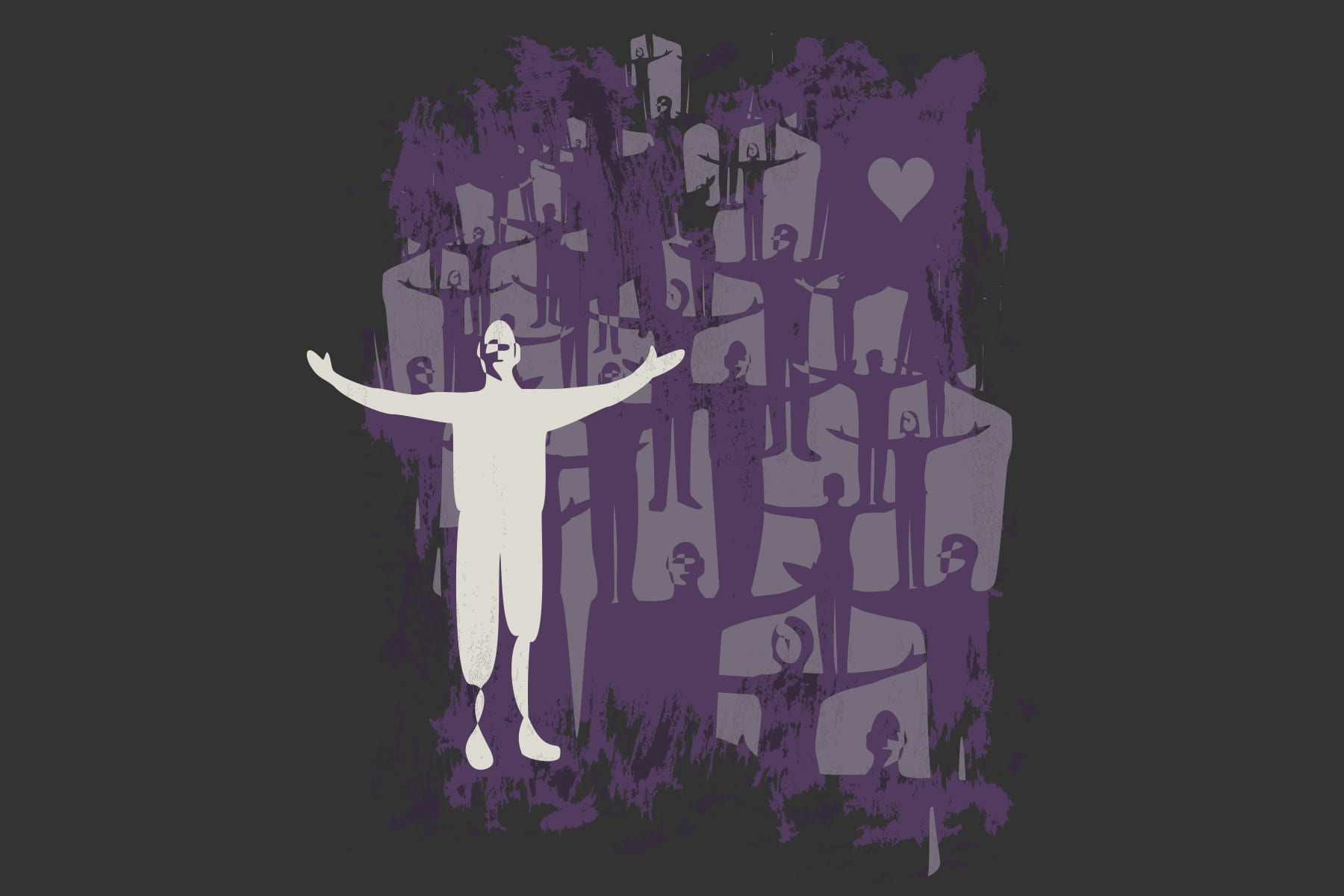 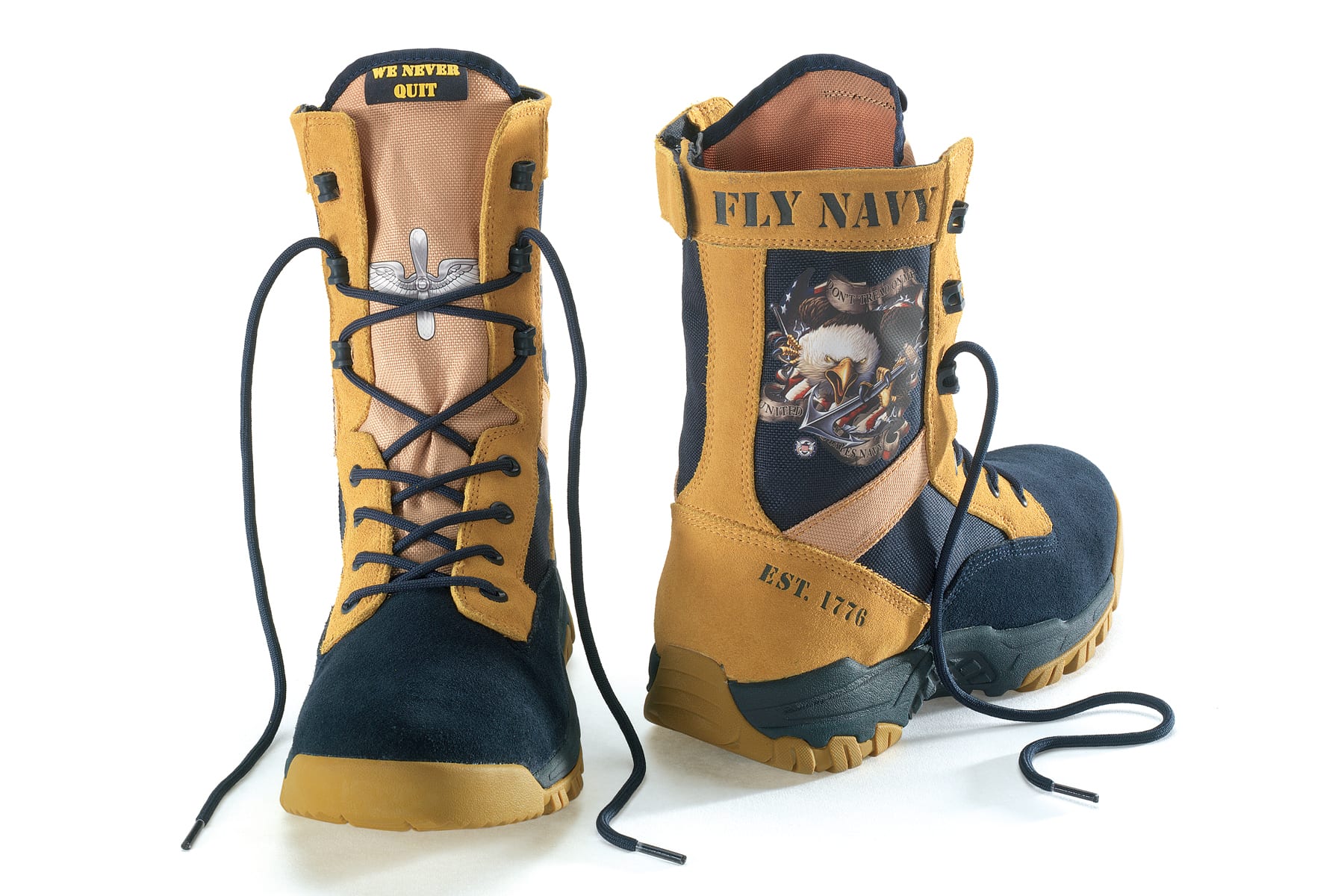 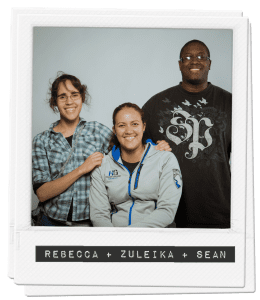 Zuleika Cruz was born in Mayaguez, Puerto Rico, where she was motivated to enlist immediately once she turned 18 years old as a result of the 9/11 terrorist attacks.

Both a U.S. Army and U.S. Air Force Veteran, Cruz suffered from cervical, back, sciatica nerve injuries, as well as chronic PTSD, from her time serving in Iraq.

Within her design, the photography “negative” represents her motto that through each negative, a positive outcome will appear. Overcoming her injuries, Cruz’s quest is to win a medal participating in the Special Olympics and Wounded Warrior Games.

Her homeland and U.S. territory, Puerto Rico, is represented through the tropical beaches, palm trees, and blue skies embedded within her design as a reminder that we are never too far away from the comforts of home. 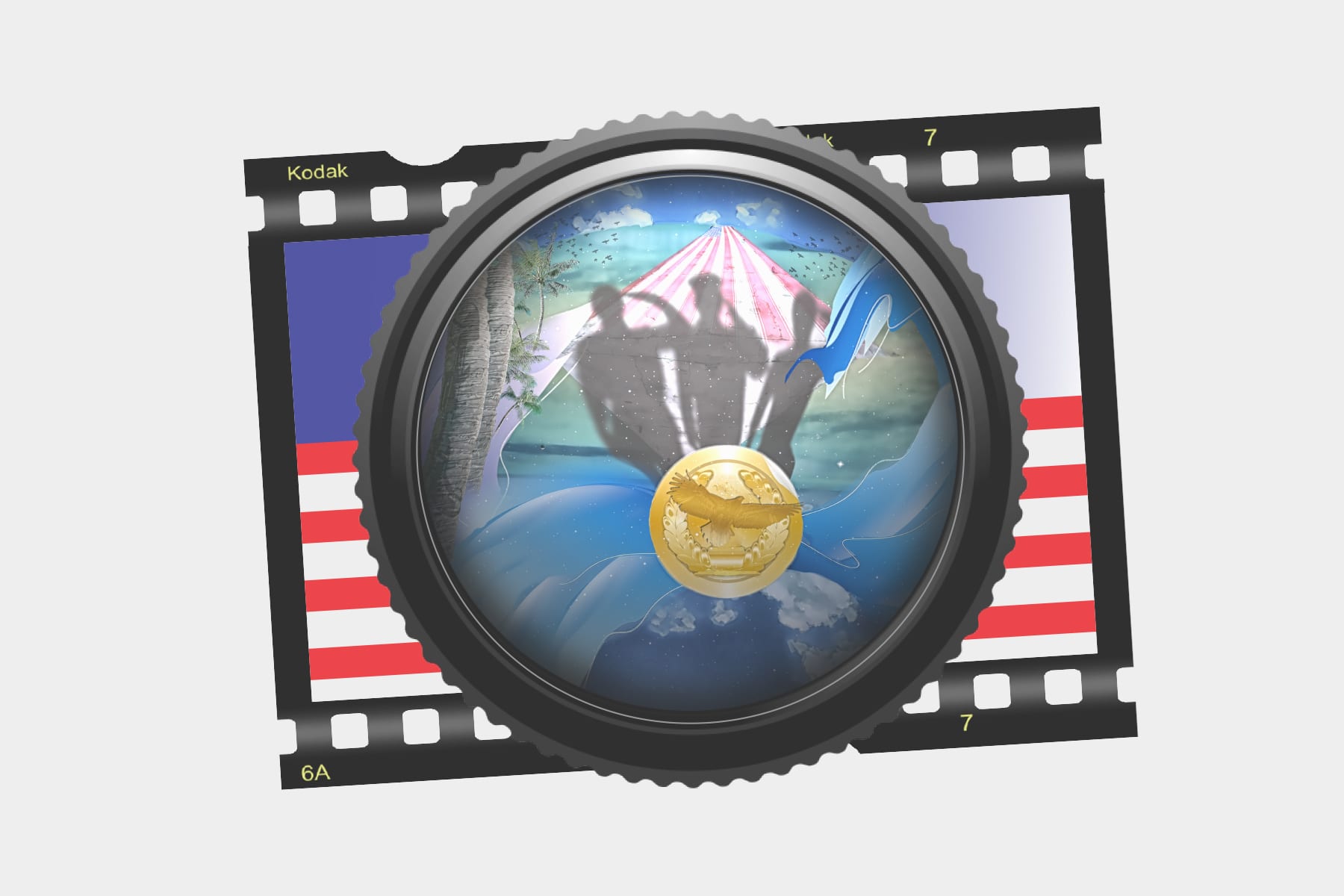 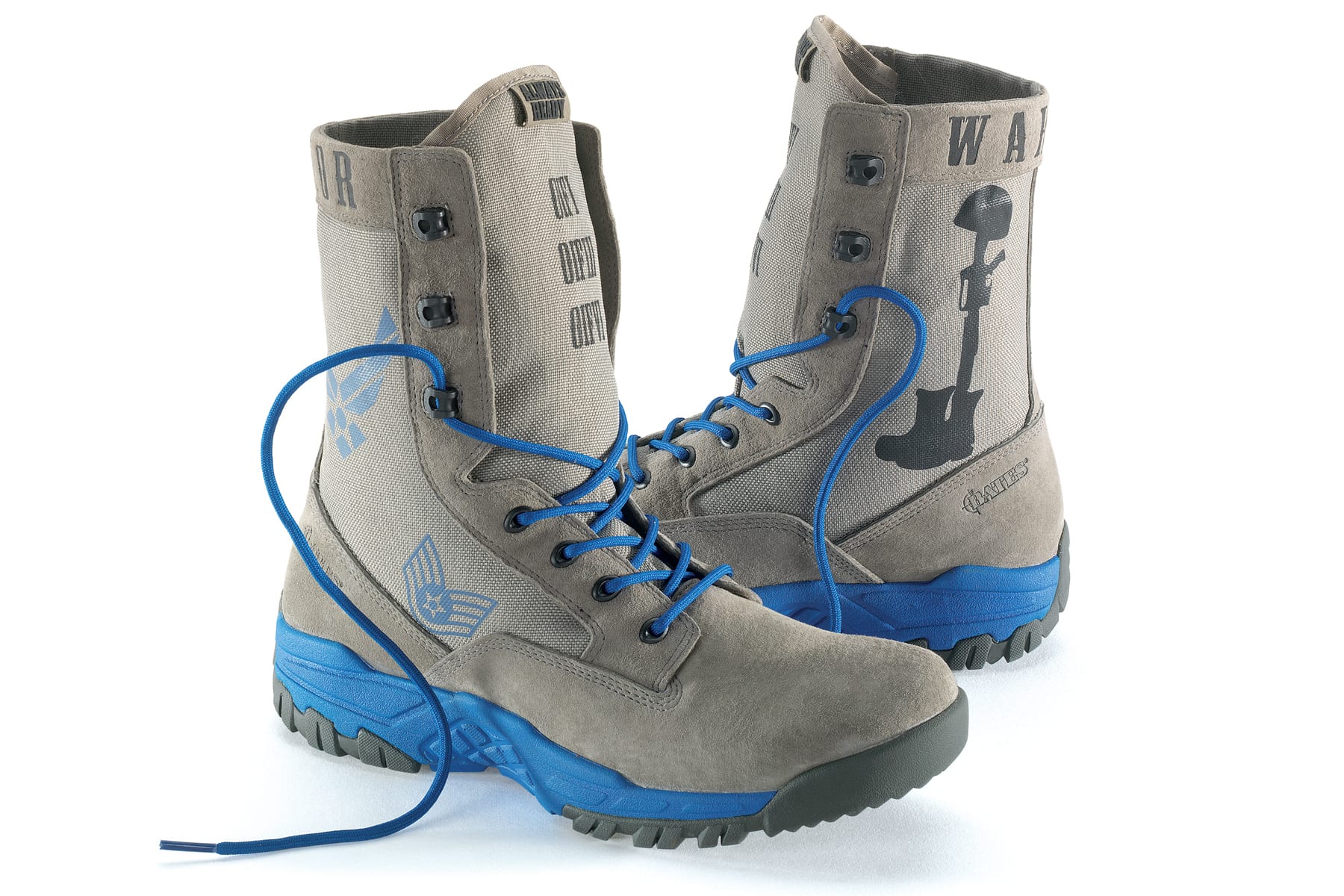 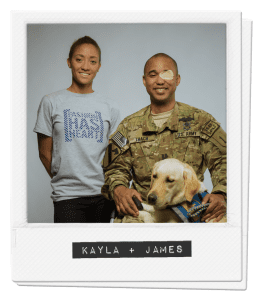 The first Vietnamese-American advisor to the New Iraqi Army, U.S. Army Captain James Van Thach forewent a career in law after graduating from Touro Law School. Instead, Van Thach volunteered for a two-year tour in Iraq where multiple attacks and injuries caused him to medically retire.

Van Thach still serves but now in the form of touring the world with his canine companion. He speaks from experience to motivate other Veterans to seek help with depression, PTSD, or other issues in order to reduce the suicide rate among Veterans.

This Bronze Star and Purple Heart recipient’s design represents his New York City roots in law, his ideals of truth and fairness, and his continued outreach to his fellow Veterans. 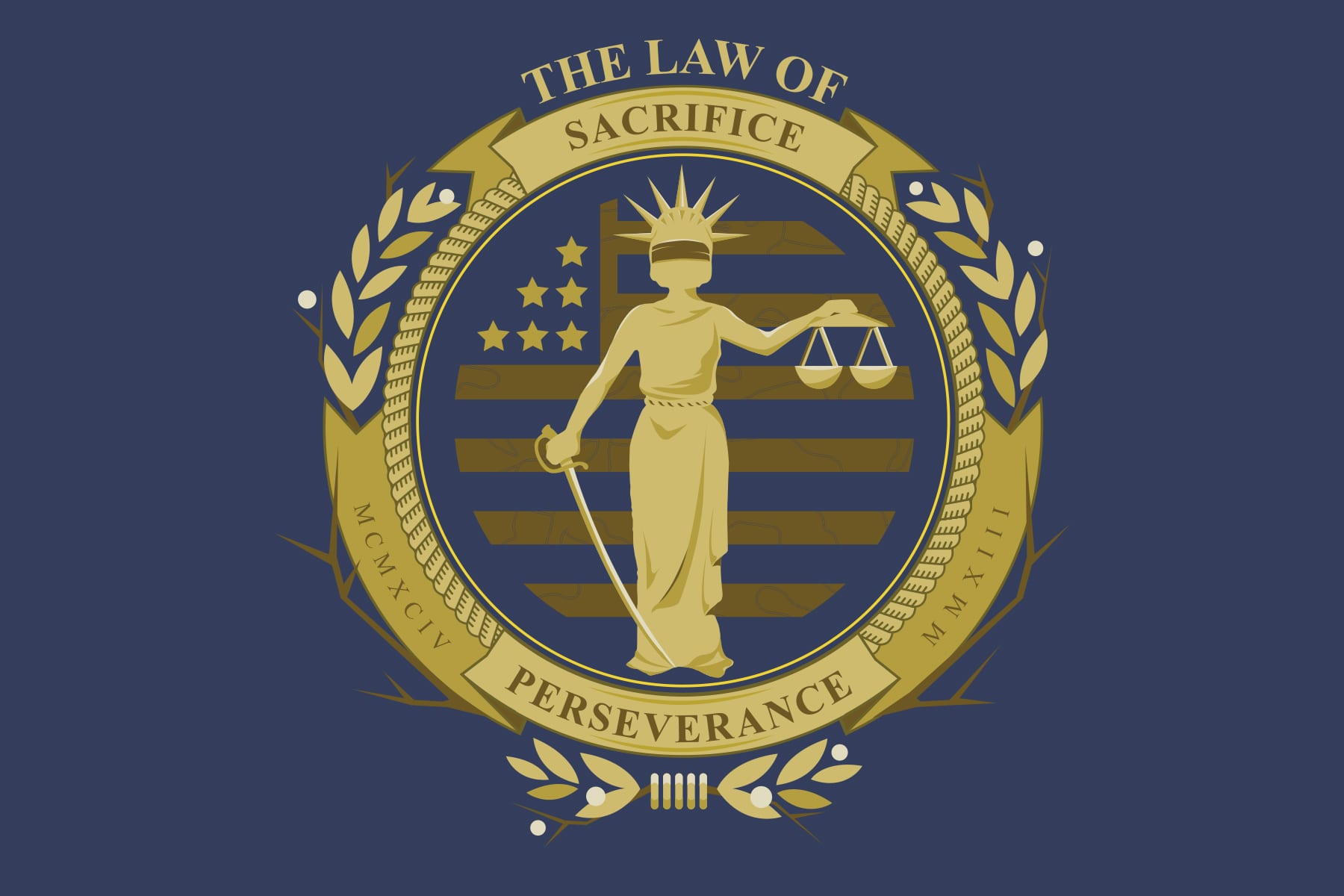 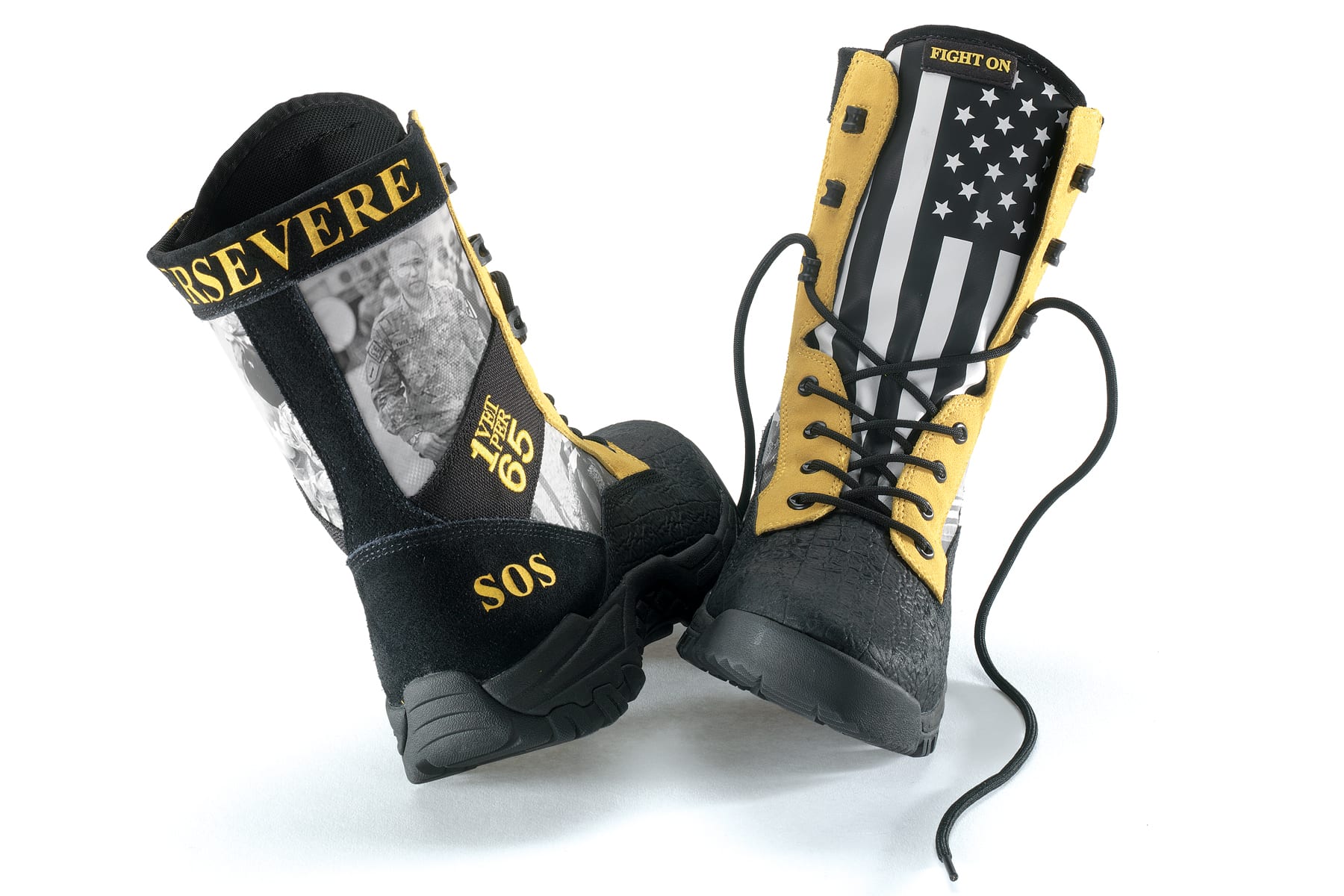 The 2013 HERO[series] project partnered five wounded Veterans with a total of eight graphic designers, enabling pairs of artists to work with a Veteran. The Veterans were flown into Grand Rapids from across the country and were all welcomed by the Patriot Guard for a week of creative collaboration.

The week was filled with a visit to the Grand Rapids Home for Veterans, a meeting with Start Garden, an organization built around cultivating and growing entrepreneurs and startup ideas, a tour of Fabri-Tech, our screen-printing partner that would be helping [HAS HEART] produce their designs into t-shirts, and being the featured guests at the Grand Rapids Memorial Day parade and ceremony.

The Veterans then worked with the design team from Bates footwear, the leading footwear supplier to the U.S. military who produced the combat boots and dress shoes that many of the Veterans wore during service, to design their own custom boots. The next day, they were partnered with their designers and worked to create their own t-shirt design that represented their story and told their message.

ArtPrize is the world’s largest open art competition in the world. It features over 1,000 artists in hundreds of galleries, businesses, and restaurants within downtown Grand Rapids, transforming the city into an endless art gallery that brings-in over 400,000 visitors within its three-week duration. ArtPrize was one of the inspirations behind the creation of [HAS HEART], and given its large audience, it was a natural fit to launch our five Veterans’ designs during it as part of a special exhibit pop-up shop.

But before we launched the ArtPrize exhibit, [HAS HEART] brought the Veterans back to Grand Rapids to personally unveil their t-shirt and boots designs, followed by a special opening event with Habitat for Humanity of Kent County and their Veterans Build volunteers who helped us construct this year’s exhibit space.

The 2013 exhibit featured each Veteran’s t-shirt design, their custom Bates combat boots, some personal items from their service, pictures of the design process, a video that shares their story, the t-shirts and boots from the 2012 HERO[series] project, and a blank wall for visitors to sign a personal message of thanks and encouragement.