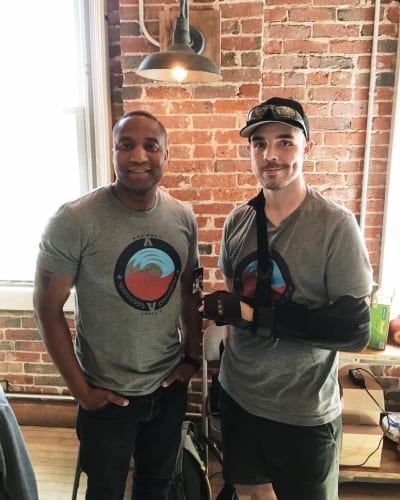 Eric Lund is joining our Co-Founder and 8-year Navy Veteran, Michael Hyacinthe in Washington D.C. this week to participate in the Civic Accelerator Veterans Solutions Lab, which is part of a larger 8-week program that will help shape and grow [HAS HEART] into a more impactful organization. Since we last visited Eric in the ICU at Johns Hopkins University in November 2017, he has begun an intensive therapy routine and relocated to the Walter Reed Hospital to continue his healing and strengthening process. We’re excited to see Eric’s progress and are thrilled to have him apart of the Veterans Solutions Lab program along us.

Anyone who has followed [HAS HEART] over the past few years will remember Sgt. (Ret.) Eric Lund, who we worked with in 2014 for a special HERO[series] project with the Detroit Pistons and NBA player, Kyle Singler. Together, they created the design “Victory,” that we later re-released for our 2016 ArtPrize exhibit to coincide with work that Habitat for Humanity of Kent County and the Home Depot were finishing in his home.

On May 20, 2012, then a 29 year-old Michigan National Guard soldier, Eric and his team were hit by a roadside IED. Flipping his vehicle over and pinning him underneath, Lund suffered numerous severe injuries that included the loss of both arms.

In November 2017, Eric received a call he’s always been waiting for but never knew when it would come… On the other end of the line was a voice telling him they found a match and he and his family needed to catch the 4pm flight that afternoon from Grand Rapids, MI to Baltimore, MD. Eric successfully made it through a marathon 14-hour surgery that required an orchestrated symphony of over 30 surgeons, doctors, nurses, and staff to skillfully complete a double-arm transplant, one of only a few ever done in the world and the first of this degree at Johns Hopkins Hospital.

Kendra and I were in the DMV area conducting our Washington D.C., Maryland, and Virginia projects, giving us the special opportunity to visit him and his mother, Laurie, while he was still stationed in the ICU.

Even though it was too soon at the time to know if his body would accept his new arms on a cellular level, Eric remarked on how well the arms seemed to be a match, even down to the skin tone. We learned that his road to recovery will take years, including much of the next one being spent in Baltimore before being able to return home to Ludington, MI.

To do what we can to help, we encourage you to purchase his “Victory” design in which proceeds will go directly to Eric and his family for his long road of recovery. Click on the design below to purchase in a variety of styles, colors, and sizes produced on-demand by Threadless.

The blue wave-like motion within his design represents defying the odds in learning how to surf, while the red stands for the stripes on the U.S. flag. The fluidity of the design signifies the journey Lund faces on a daily basis, while the olive branches signify the victory he works toward and the reward of peace it brings him. The dot within the “V” is the “faith of a mustard seed” he and his family clung onto in the darkest hours. Each star symbolizes an arm lost while the “A” above is a reminder that May 20, 2012 (V.XX.MMXII) was really his “alive day” in his new life where nothing goes unappreciated.

Watch the video about Eric’s story and design process with Kyle Singler and the Detroit Pistons below, and view more from that day and its launch at a Pistons home game on the 2014 HERO[series] page.